These are the archives of WKU’s history of competitive speech and debate. It would be a mistake to consider them a history of the forensic team, as competition in oratory and debate are not exclusive to that one body.1 It would also be anachronistic. There was no such team in 1910 when Lucile Wade won an intramural oratorical contest. To reach back in time and force Ms. Wade into a narrative about a group formed later is, in effect, an act of appropriation. This is why these archives record an activity rather than an organization. Each competitor found in these archives was and is instead part of their own story, with their own context, like a snapshot. While each snapshot can be strung together into a narrative, one must keep in mind that the narrative is also a construction, and that the construction is one of this author and not of the competitors themselves. With that qualification given, one could describe the narrative of competitive speech and debate on The Hill as the following.

The earliest known records of competitive public speaking on The Hill begin with the 1885 intramural Ogden and Robinson oratorical competitions. The Normal school also began intramural oratory by 1899, regularly by 1910.2 Intercollegiate competition, also, began in 1910–then in oratory and later debate–as the Normal school moved up onto the Hill, merging with the women’s college and alongside Ogden College. A regular debate team and annual competition in oratory–individually, not as a team–developed in 1934-35, but debate dissolved in 1940. 1950, however, marked the creation of a permanent body competing in all three of the current genres of forensic competition: debate, oratory, and the interpretation of literature. Interpretation events were not common, however, at the tournaments at which WKU competed until the very early 1970s, following a growing trend in the academic study of the interpretation of literature. Since 1934, competition in speech and debate on The Hill was interrupted only by the Second World War and the Reagan Recession.

A note on procedure

Regarding historical practice, first, there are gaps in our knowledge which could lead a reader to misplaced conclusions. It may likely have been lack of access to sources which shaped the mistaken claim in the 1974 forensic team flyer–available below–that the team was formed in 1924.3 Drawing conclusions from a lack of information is problematic, but at times necessary. In these archives, implications derived from changes in source quantities will be claimed transparently so that a reader always knows when the Author is speaking beyond the sources. The 1974 team flyer offers another lesson: secondary historical sources, such as this website, should always be treated with skepticism. This website is a repository for information, but a serious researcher should not settle with this work. In fact, this website is always growing. Third, the scope for this project is best understood as the following: “the history of competitive speech and debate on The Hill.” These archives do not include contests for groups primarily engaged in other activity, such as a greek organization which may host an oratorical contest. The archives also mostly overlook non-competitive speech and debate (e.g.: Green River Readers of the 1970s). They also constrain our claimed heritage to the following Bowling Green schools: Ogden College for Men, Potter College for Young Ladies, and the Western Kentucky State Normal School & Teacher’s College, but only partially Bowling Green Business University.4 Finally, note that at points one will find contemporaneous terms and titles rather than current–anachronistic–assignations, so you will find that women who competed in debate in 1926 were in the “Girls Debating Club.” Note, however, that this policy changes after roughly the 2010 point, as some alumni have asked to use not their birth-assigned names, but only current names. As such, some names found in these archives will not be reflected in primary sources.

Each decadal page below is further subdivided into annums, with differing types of content available at various different points. The format, therefore, varies considerably. Some annual subsections offer more information than others, including extra photographs, forensic team banquet awards by 1973, and often links to an external forensic team competition awards highlights list (state and national). If you prefer to access the competition awards information in a single sheet, that can be accessed at the WKU Debate and Speech Awards Archives. These archives also include the digital archives of the memorial cinder blocks of Garrett Conference Center room 201. These blocks, painted by some team members between 2006 and 2013 can be found on the Memorial Blocks page, and in the annual subsections for the years 2006 through 2013.

For the sake of transparency, these archives were constructed by WKU Forensic Team alumnus and staff member Chris Chandler, with the help of the WKU Archives, beginning over the 2015-16 school year. The WKU Archives staff, namely Suellyn Lathrop and April McCauley, proved invaluable in increasing manifold the content of this project from its original 2005 iteration. And content continues to be added and updated. Should any reader wish to update or amend the content within, please email the Director of Forensics at WKU. If you’ve primary sources (photographs, event programs, or letters) to add to the archives, please do not send them to the forensic team, but instead contact the WKU Archives. The university is always eager to collect and store the documents which record its history. 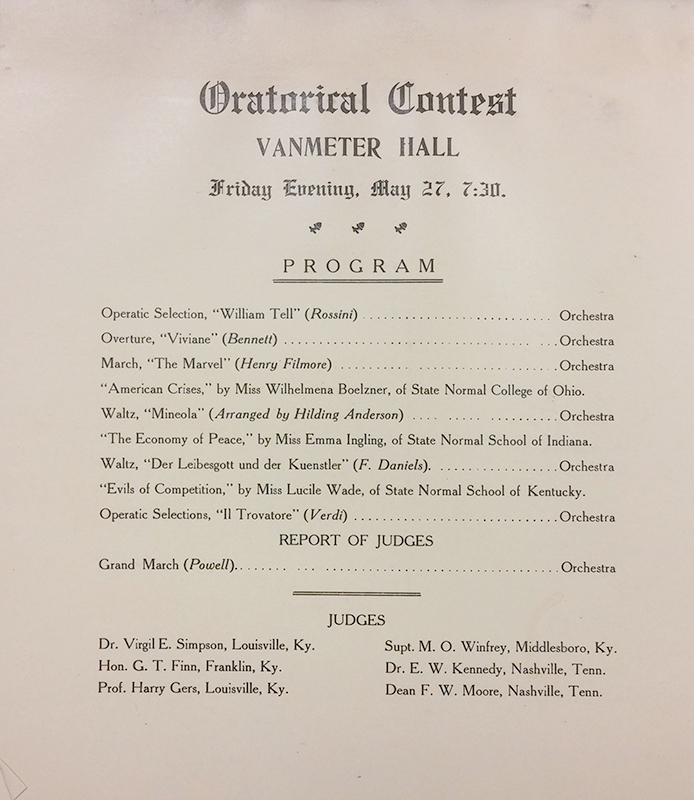