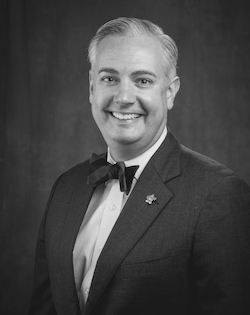 Timothy C. Caboni, a 1994 graduate of WKU, returned to the Hill on July 1, 2017, as 10th president of WKU. During his inaugural year as president, Caboni is leading a comprehensive strategic planning process to serve as a roadmap for WKU’s next decade of growth. Of particular importance will be renewing WKU’s mission of advancing the City of Bowling Green, the Commonwealth of Kentucky and the world by inspiring innovation, elevating communities and transforming lives.

President Caboni, who holds a PhD in higher education leadership and policy from Vanderbilt University, served as the vice chancellor for Public Affairs at the University of Kansas for six years.  Prior to that he was associate dean of the Peabody College of Education & Human Development at Vanderbilt University in Nashville, Tennessee.

At KU, Caboni led public affairs for KU’s four campuses and the KU Medical Center.  He served as the principal spokesman and coordinated the communication activities of the University with those of the KU Alumni Association, KU Endowment and Kansas Athletics, Inc.  Caboni oversaw the communications, marketing and advocacy efforts of the University and coordinated KU’s legislative agenda at all government levels, championing issues that include research funding, higher education policy and health care.  He also was responsible for the operations of Kansas Public Radio and was associate professor of educational leadership and policy in the School of Education.

Caboni was an active member of the Lawrence, Kansas, community, serving on the board of the Lawrence Chamber of Commerce and the Joint Economic Development Commission of Lawrence and Douglas County as well as the boards of the Lawrence Art Center and the Lied Center for the Performing Arts.

As associate dean at Vanderbilt, Caboni oversaw the Peabody College’s 21 professional graduate degree programs and graduate and professional financial aid for the college, and he led outreach, partnership and program development efforts for the college as well as communications and admissions.  His leadership contributed to the school’s rising to No. 1 in the U.S. News & World Report rankings of graduate schools of education for three consecutive years.

President Caboni is a native of New Orleans, La., and received a bachelor’s degree in speech communication and rhetoric from Louisiana State University. He earned a master’s degree in corporate and organizational communication from WKU.  His higher education professional experience includes alumni relations, fundraising, prospect research, teaching, academic administration, communications, marketing and government relations.  He has published nearly 30 articles and one book.  His current research is focused on use of data-based decision-making in higher education fundraising.

President Caboni is married to Kacy Schmidt Caboni, who was director of development and team leader for the School of Business with the Kansas University Endowment. She was instrumental in the construction of Capitol Federal Hall, the new home of the KU business school, funded entirely through private philanthropy. In addition to serving as WKU’s First Lady, Kacy Caboni is director of principal gifts and special initiatives in the Office of Development and Alumni Relations at WKU.