Alltech China and WKU are proud to announce a new internship program in conjunction with the Chinese Language Flagship Program at WKU.

One of only 12 such programs in the nation, the Chinese Language Flagship Program at WKU seeks to bring students from the beginning level of Chinese proficiency to the superior level during their undergraduate career. Sponsored by The Language Flagship, an initiative of the National Security Education Program within the Defense Language and National Security Education Office, the course offers many intensive Chinese language opportunities in the U.S. and China. Now those opportunities will include internships with Alltech in China, where Alltech established business in Beijing in 1994 to serve the local feed and livestock industry.

Participating in the Alltech China internship will not only allow selected WKU students to gain hands-on experience speaking the Chinese language, but also to explore China’s unique business environment. In addition to 30 hours per week of internship responsibilities assigned by Alltech, the participants will receive 10 hours per week of one-on-one language instruction. They will also have time to explore China and further enhance their cultural competencies.

The two inaugural students are both members of the Honors College at WKU for academically talented, creative and high-achieving students. 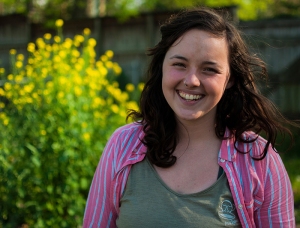 WKU junior Alexis Corbin of Lawrenceburg is pursuing bachelor’s degrees in cultural geography and Asian religions and cultures. Corbin has volunteered at a permaculture farm in Taiwan, interned with the community garden program Top Crops, which works with the Bowling Green special needs community, and serves on the Student Government Association sustainability committee.

WKU senior Megan Laffoon of Louisville is pursuing a bachelor’s degree in biology. Laffoon, who was named a Goldwater Scholar in 2014, conducts research on the application of hugelkultur raised garden beds to karst rocky desertification topography with WKU hydrogeology professor Dr. Chris Groves and WKU biology professor Dr. Albert Meier. Laffoon has participated in a United Nations workshop on water resources and presented her research in China; she also interns with the WKU Office of Sustainability through the Project Grow program, assisting with the campus community garden.

Dr. Craig T. Cobane, chief international officer of global learning at WKU, said that the combination of excellent academic preparation, fluency in the Chinese language and the opportunity to “get their hands dirty” in their chosen profession will further enhance the students’ educations and jump-start their career trajectories as “global professionals.”

“WKU and Alltech have a long and mutually beneficial relationship,” Cobane said. “Alltech’s corporate culture of progressive and sustainable strategies is a good match for the vision of WKU and our students. Alltech, as a corporate leader in Kentucky, understands the need to ‘grow our own’ talent pool instead of relying on recruiting it from elsewhere.”

Dr. Mark Lyons, global vice president and head of greater China for Alltech, said the company was very excited to learn about the WKU Chinese language program as Alltech’s activities in China have expanded considerably in the past five years.

“Alltech has been active in the Chinese market since the mid-1980s with our own office opening here in 1994,” said Lyons. “We want to inspire more young people to experience different cultures and to decide to pursue careers in agriculture and science, and this program supports both of these initiatives. While the world has grown smaller through the development of the internet and social media, nothing replaces personal experiences and connections, and this program will help WKU students to experience the business world in China.

Alltech and WKU have a longstanding friendship featuring many partnerships and collaborations. In addition to the new internship program, Alltech and WKU recently opened the largest brewing production facility on any university campus in the United States. The brewery will produce a beer called College Heights and will also support new undergraduate and graduate programs in brewing and distilling.

About Alltech: Founded in 1980 by Irish entrepreneur and scientist Dr. Pearse Lyons, Alltech improves the health and performance of people, animals and plants through nutrition and scientific innovation, particularly yeast-based technology, nutrigenomics and algae. With nearly 100 manufacturing sites globally, Alltech is the leading producer and processor of yeast and organic trace minerals, and its flagship algae production facility in Kentucky is one of only two of its kind in the world. The company’s guiding ACE principle seeks to develop solutions that are safe for the Animal, Consumer and the Environment and is actively supported by more than 4,700 team members worldwide. Alltech is the only privately-held company among the top five animal health companies in the world. This is a source of competitive advantage, which allows Alltech to adapt quickly to emerging customer needs and to stay focused on advanced innovation and long-term objectives. Headquartered just outside of Lexington, Alltech has a strong presence in all regions of the world. For  information, visit www.alltech.com/news.

About the Chinese Language Flagship Program at WKU: The Chinese Language Flagship Program is a federally-funded grant program for undergraduate students. Students begin the program with little to no exposure to Chinese language or culture with the goal of reaching a superior level of language proficiency by graduation. Students spend an intensive amount of time in language immersion courses during the semester and enroll in study abroad and study away programs during breaks. Their final capstone year is spent studying and completing an internship in China. For  information, contact Jennifer Markin at (270) 745-2764.