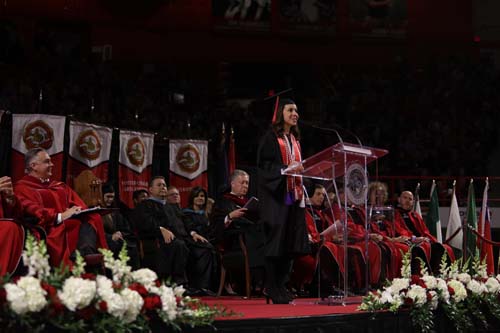 Kelly Burgess, a Hospitality Management and Dietetics major and graduate of the Mahurin Honors College, was recognized as the Ogden Foundation Scholar at the morning ceremony. The award, WKU’s top graduation honor, is presented to one graduating baccalaureate degree senior who has demonstrated exceptional academic achievement and outstanding university and civic engagement. (More: Class of 2017 encouraged to make a good life; photos from Commencement activities are posted on the WKU Facebook page.)

Burgess, the daughter of Keith and Beth Burgess of Franklin, Tennessee, also was recognized as a scholar of the College of Health and Human Services.

Scholars of the College

WKU recognized 12 other Scholars of the College, who had the highest GPAs in their colleges while completing at least 60 credit hours at WKU.

Graduates of WKU’s Doctor of Education (Ed.D.) in Educational Leadership participated in a hooding ceremony Saturday morning and were recognized at the afternoon commencement ceremony.