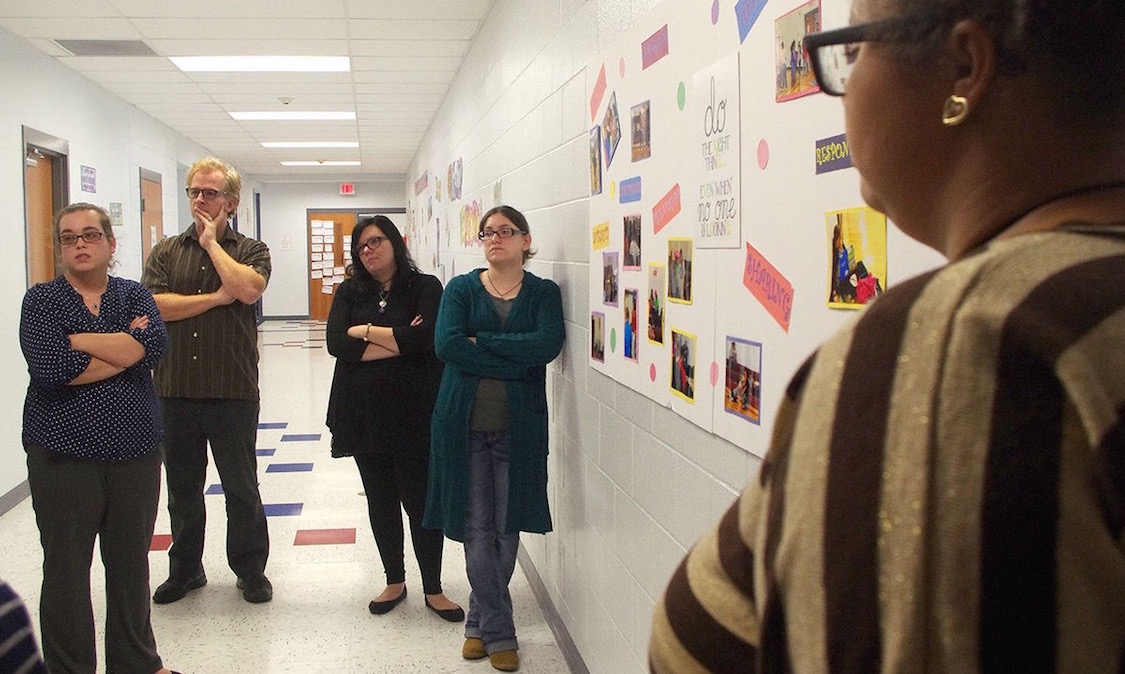 Social work students at Western Kentucky University-Glasgow presented semester projects based on the needs of the Boys and Girls Club of Glasgow-Barren County on Tuesday afternoon.

The projects included a photo wall, an improved mentoring cabinet and a book shelf.

Dr. Simon Funge, assistant professor in the Department of Social Work at WKU-Glasgow, sits on the club's board of directors.

The social work students were allowed to apply for $100 in funding through The $100 Solution to buy what they needed to do for their projects.

The projects were to be sustainable, as well as offer reciprocity to benefit the agency, the community and the student participants, he said.

Nia Johnson, a Hiseville senior social work student, was part of a group that created a photo wall at the club.

She and her fellow classmates photographed club members and secured the photos to a background and hung it along one wall of the club.

The purpose of doing the photo wall was to help the club members get some recognition.

The group did run into some setbacks in doing their project, she said.

Johnson believes it is the foster children who probably need the recognition more than others.

“The ones who are on there are probably the ones who are getting recognition somewhere else,” she said, adding that if she and her classmates could have put photos of the foster children on the wall, it would have been a great way to recognize them within the club, as well as within the community.

Andy Tanaro, a Munfordville senior social work student, was part of a group that made improvements to the club's mentoring cabinet, which is filled with games and puzzles for mentors to use when spending quality time with club members.

“It was a little difficult coming up with things to put in it, because things they already had were things were were thinking of,” she said, during her part of the presentation. “We had trouble thinking of other things. We thought it was going to be a little bit easier than it actually was.”

Tanaro's group also purchased craft supplies the club members and their mentors could use to make bracelets and other items.

Her group also repainted the cabinet to give it a new look and developed a binder, featuring helpful hints on mentoring and explains what mentoring actually is.

Tanaro, who is also a singer in an area band, donated a guitar for the club members and their mentors to play. She demonstrated how to play the guitar as part of her group's project presentation.

Mary Lee England, executive director of the club, said the projects the social work students did were “very beneficial to the club.”

“Our impact is only as strong as it is because of our volunteer involvement. That's when our impact really shows,” she said. “That's when it goes the deepest (and that) is whenever our community jumps in and comes into the club and works with our children hands-on.”

As for the group that provided the club with a new book shelf and conducted a book drive, England said, a lot of the club members are reading below their grade levels.

“Whenever they are below grade level in reading, they struggle in all other subjects also, so it's really important to us to make sure all of our children and all of our youth are reading on grade level,” she said.

When children find a book that appeals to them, she said they get excited about reading.

“They want to read and it naturally opens their mind and they can learn a lot quicker,” England said.