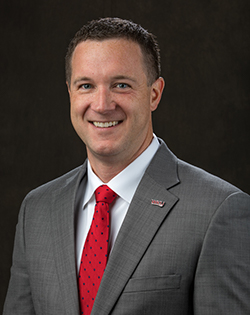 I have the privilege of serving my alma mater as the Director of Media Relations and University Spokesperson.  This role allows me the opportunity to share the WKU story with a broad audience and to talk about a place that means so much to me and my family.

Prior to my time in Media Relations, I served as the Director of Recruitment and Admissions for seven years. In that role, I oversaw an outstanding team of talented individuals.  Admissions is primarily responsible for the recruitment, admission, and new student orientation of all undergraduate students.  As part of the Division of Enrollment and Student Experience at WKU, I worked closely with financial aid and retention initiatives. In 2020, despite reduced access to students due to the COVID-19 pandemic, WKU’s first year class increased by more than 400 students over the previous year.

I earned my B.A. and M.A. in Communication and my Doctorate of Educational Leadership from WKU. In my spare time I enjoy traveling with my two boys and my wife, also a WKU graduate. I also enjoy reading, exercising, and watching movies. Every now and then, I’m also fortunate enough to be able to teach classes, primarily public speaking, global communication, and political communication courses.

Lux J.  (2014).  Are they getting what they need?  An analysis of the skills former collegiate forensic competitors find most useful in their current careers.  The Forensic, 99 (2), 21-34.

Mission Possible: Examining the Value of Academic Debate Formats Through the Lens of Contrast and Comparison in Relation to a Standard of Educational Value
National Communication Association Annual Conference, November 2014