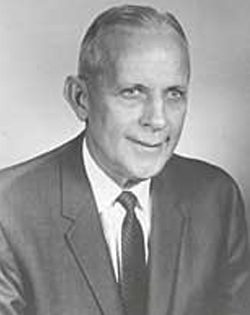 Dr. Thompson, born in 1909, served as the third president of WKU and the College Heights Foundation. He worked for the University for more than 60 years. He was first hired by Dr. Cherry in 1929 as a field representative, and later served as director of public relations and assistant to the president before his elevation to president after Dr. Garrett passed away.  Dr. Thompson was University President from 1955 to 1969.  During his tenure as school president, enrollment increased by nearly 600 percent, and as faculty numbers grew, so did the percentage of those with doctorates – from 23 percent to 43 percent. The institution became known as Western Kentucky University in 1966. He was awarded a special commendation by the Secretary of the Navy for outstanding performance of duty as an officer during WWII. The WKU affiliate of the national Public Relations Student Society of America honored Thompson in 1977 by designating its official name as the “Kelly Thompson Chapter of PRSSA.” He is also the namesake of WKU’s Thompson Complex.

Under Dr. Thompson, the College Heights Foundation was reorganized to perform better as a business and the position of President was separated from the University President for the last 10 years of his service.  A perpetual trust, the Memorial Fund, was created and it grew by nearly $2.3 million during Thompson’s tenure. The CHF saw scholarship award amounts increase by more than $466,000 post-reorganization, awarded more than 2.5 times as much non-scholarship award money from 1970-1978 as compared to 1962-1969, issued more loan money ($1.3 million) in nine years after reorganization than during first 46 years of CHF ($1.1 million) and had $3.2 million in assets.  Dr. Thompson passed away in 1993.