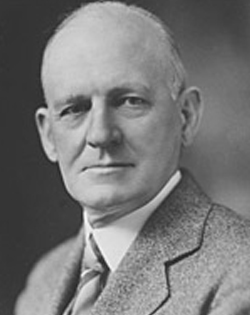 Born on November 16, 1864, Dr. Cherry was the first president of what we now know as Western Kentucky University. In 1892, he and his brother, Thomas Crittenden Cherry, purchased what was then Southern Normal School to save it from collapsing. H.H. Cherry bought his brother’s half of the institution in 1899 and later became the first president of the renamed Western Kentucky State Normal School in 1906. He remained president until his death in 1937. Dr. Cherry was a renowned visionary, educator, and orator whose proclamation “The Spirit Makes The Master” guides the campus community still today. Whether it be through his statue in front of Cherry Hall or copies of his book, “Education: The Basis of Democracy,” Henry Hardin Cherry’s presence at WKU is evident to anyone who steps foot on the Hilltop campus.

He established the College Heights Foundation in 1923 after receiving $100 from a faculty member to aid deserving students in need of some financial assistance. Dr. Cherry served as CHF president for the first 14 years of its existence.  Under Cherry, the College Heights Foundation had a primary charge of serving as “the channel through which students could seek financial assistance and friends of the institution could help provide it.” The CHF also took over operation of the campus bookstore in 1934 and began raising funds for the Kentucky Building in 1928. Construction began in 1931, but it was not completed until 1939.  The College Heights Foundation operates today under the same Articles of Incorporation drafted in 1923, which is an outstanding tribute to Dr. Cherry and those founding members of the CHF Board of Directors.