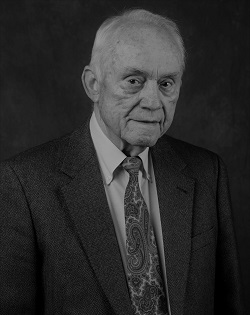 Dr. Jerry W. Martin is a retired physician who practiced family and occupational medicine on his own and with Graves Gilbert Clinic with Dr. Jack Glasser.  He served as a team physician for the WKU Hilltopper Football team for 34 years—from 1968 until his retirement in 2002.

He earned his Bachelor of Science degree from WKU in 1958 and his MD from the University of Louisville in 1963.  He participated in Alpha Epsilon Delta while at WKU.

Dr. Martin is an American Academy of Family Physicians (AAFP) Delegate to the American Medical Association (AMA) and represents the AAFP at all AMA meetings. He was first appointed in 1998 as AAFP’s Alternate Delegate to the AMA and in 2004 was appointed to his current position.  Dr. Martin became a Fellow in the AAFP in 1972 and achieved American Board of Family Medicine (ABFM) Diplomat status in 2003.  He is also a past President of the Kentucky Academy of Family Physicians.

In 1994, he was made a letter winner for being a long-time team physician and was made an honorary member of the W-Club.