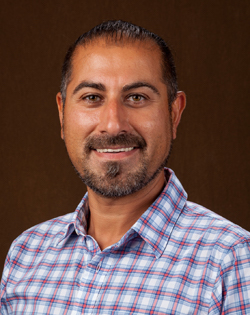 Dr. Ahmet Ozkan Ozer, Assistant Professor of Mathematics, has been appointed as a member to the prestigious American Mathematical Society (AMS)--Mathematical Association of America (MAA)--Society of Industrial and Applied Mathematics (SIAM) Joint Committee on Employment Opportunities.

Dr. Ozer, called Dr. Ozz by his students, has been the faculty advisor of the Society of Industrial and Applied Mathematics Student Chapter of WKU since 2019. The chapter has hosted a number of events with many applied mathematician-speakers who work in top tech companies in the United States to inspire WKU students and to provide broad and nationwide networking opportunities.

The AMS, MAA and SIAM are the largest math societies in the world. Dr. Ozer’s three-year term on the national/international committee will begin Jan. 1, 2021.

“I am extremely proud of representing WKU’s voice in this committee,” he said.

The Committee provides advice and feedback to the AMS about the operation and policies of the Employment Center (EC) and the journal, Employment Information in the Mathematical Sciences (EIMS). The EC schedules interviews and provides a venue for additional contact between prospective employers and employees at the Joint Mathematics Meetings of the AMS and MAA. The EIMS lists open positions and is available in both print format and electronically at the AMS website (www.ams.org/eims). The Committee may also comment on and suggest new ideas for supplementary services, such as advising job applicants on resume writing and interviewing skills.