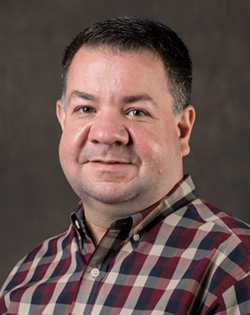 Mr. Cole began his career in nursing in 1993 with his first job working as a certified nursing assistant. In 1997, Spencer earned his practical nursing diploma from Glasgow School for Health Occupations. After working as an LPN for 6 years, he earned his Associate Degree in Nursing in 2003. He later completed his Bachelor of Science in Nursing 2007, along with his Master of Science in Nursing Education in 2010, all from Western Kentucky University.  In 2017, Spencer completed the Psychiatric Nurse Practitioner here at WKU.

Mr. Cole began his teaching career in 2004 as an instructor at Bowling Green Technical College, where he taught for over 8 years before coming to teach for the Associate Degree Nursing program at WKU in 2012.  Currently, Spencer teaches Mental Health Nursing in the BSN program as well as in the LPN-ASN online program.

Prior to teaching, Mr. Cole worked in the area of long-term care as well as psychiatric nursing. Spencer also currently works on a PRN basis as a Phychiatric Mental Health Nurse Practitioner for an area hospital.