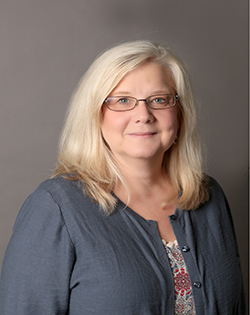 Rebecca Collins graduated from the ADN program at WKU in 1985 and received her BSN from WKU in 1990.  Upon graduation from the ADN program, she was employed by Greenview Regional Hospital in Bowling Green from 1985-2007.  Over this 22 year span at Greenview, she worked as a staff nurse in med/surg, IV therapy, critical care, and other areas including ER, and telemetry.   Her primary experience was in the critical care unit from 1988-2007. Other duties at Greenview included being on the preceptor team, and the EMAR instructional team.  Rebecca volunteered to write and distribute the critical care’s monthly newsletter.  She represented Greenview Hospital and was awarded one of the Nursing Excellence awards during Nursing Week in 1996.   Interest include critical care, simulation, and creative learning ideas.  Rebecca applied for the Learning Resource position for the ASN program in 2007 and was hired by August of that year.  Currently, she is the School of Nursing's student/faculty resource person for the skill's lab, computer lab, and simulation lab for the south campus location as well as assisting as needed with the simulation lab at the Medical Center Health Sciences location.  Other experience includes being a part time instructor for the LPN to RN students in the medical/surgical skills lab from fall of 2016 to fall of 2017.