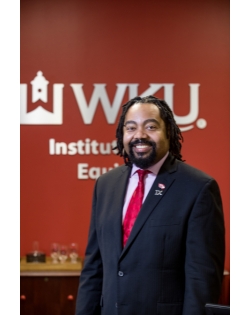 During his time at WKU, he graduated with a Master of Arts in Administrative Dynamics, earned a Graduate Certificate in Leadership Studies, and completed his Master of Arts in Education in Adult Education degree with a 4.0 grade point average. He was honored as the Outstanding Graduate Student in Adult Education, and received the Dean’s Citation for Academics from the College of Education and Behavioral Sciences Department of Educational Administration, Leadership and Research at WKU, and has been recognized as a WKU Distinguished Faculty/Staff for the Martin Luther King, Jr. calendar. Mr. Hayes was accepted to the Doctor of Education in Educational Leadership program at the University of Kentucky in fall 2014, and completed coursework in 2016.

In addition to being a strong advocate for leadership and education, Mr. Hayes also believes in being actively involved in his community by mentoring students and serving in organizations. He has served as the National Association for the Advancement of Colored People (NAACP) Bowling Green/Warren County (BG/WC) Branch President, NAACP BG/WC Education Committee Chairperson, and Co-Advisor for the WKU NAACP Chapter. As a member of Alpha Phi Alpha Fraternity, Incorporated, Mr. Hayes has also been active as the Kentucky Employment Initiative Coordinator, Advisor for the Eta Rho Chapter at WKU, in addition to Vice President and Brother of the Year for the Omicron Nu Lambda Chapter in Radcliff, KY. Mr. Hayes contributed as a Big Brother through Big Brothers Big Sisters (BBBS) of South Central Kentucky for 8 years, as a BBBS Board Member for over 3 years, and has been recognized as a BBBS Big Brother of the Year.