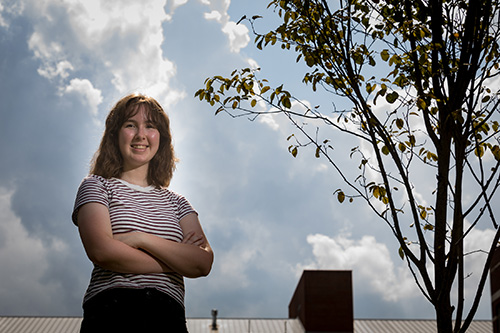 Zoe Ward, a junior from Frankfort with a double major in Biology and Spanish spent the summer researching two songbird species in the Arctic North Slope of Alaska.

“We monitored the songbirds throughout the field season, which is 24-hour daylight. We implanted some species with melatonin, and others with a control and then fitted the birds with accelerometers to track their activity levels,” Ward explained. “It is really interesting because there are not many researchers conducting work in the area we were.”

Ward’s research is focused on gaining better insight into the songbird’s circadian rhythms, which is the internal process that regulates the sleep and wake cycle. She said she hopes it can eventually be used by medical researchers.

“I like the idea of contributing to something that could lead to the discovery of something larger one day,” Ward said.

Ward enjoyed her summer research project so much that she decided to make melatonin implantation in Lapland Longspurs, Snow Buntings and Zebra Finches the topic of her honors college undergraduate thesis.

“I started at WKU as a Gatton student where I originally conducted astrophysics research,” Ward said. “I applied for a research position with Dr. Ashley, and after I started that position, I decided to switch my major to biology,” Ward said.

In 2018, as a Gatton Academy student, Ward participated in a three-week, study abroad program at Harlaxton College in Grantham, England.

“I am really thankful for all of the opportunities that WKU provided me with,” Ward said, when asked about factors contributing to her success. “I don’t know if I would have had these opportunities to travel and experience so many different places had I attended a different university.”

“WKU has a great sense of community with endless support for the students and professors that are willing to take students under their wing and teach them more than can be learned in the classroom,” Ward said.

In addition to her research, Ward has a passion for conservation and plans to apply for a Fulbright scholarship. If awarded, she would work on an independent project in New Zealand. Ward plans to pursue a master’s degree in ecology and eventually work for a conservation organization.

“The [Mahurin] Honors College at WKU has contributed to expanding my knowledge and communication with others. I feel that I have become somewhat of a cultural liaison from the opportunities I have received,” Ward said.

For more information about a major in Biology, visit https://www.wku.edu/biology/.