WKU listed among 'Best for Vets' for 9th straight year 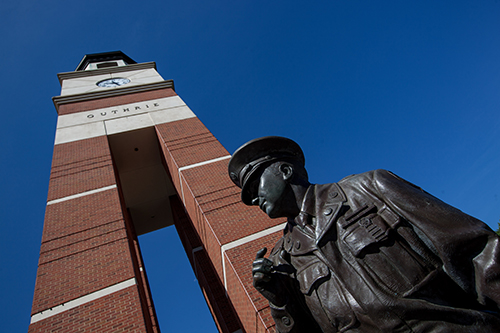 For the ninth consecutive year, WKU has earned national recognition as a “Best for Vets” school by Military Times.

WKU is ranked 24th in the nation and second in the Appalachia region in the 2021 Military Times Best for Vets: Colleges rankings. WKU has ranked as a “Best for Vets” school every year since 2013.

More than 300 schools participated in the latest Best for Vets: Colleges survey, which included more than 70 questions seeking details about the school’s costs, programs, policies and services that impact military-connected students. Federal data from the U.S. Departments of Education, Veterans Affairs and Defense, were also considered.

“I am pleased to see that we are again being recognized as a ‘Best for Vets’ school by Military Times,” said Kent Johnson, director of WKU Military Student Services. “I am sure the many programs and policies that WKU has in place for military connected students, such as the ‘Textbooks for Troops’ program, the military tuition rate, military withdrawal and absentee policies and so on, helped contribute to our being awarded this honor, but what also makes a positive impact on the student experience at WKU, is the level of support they receive. We are here to help the students be successful and I love seeing the network of faculty and staff at WKU that care about our students.”

The Textbooks For Troops program, founded in 2011, has helped hundreds of military-connected students gain access to textbooks each semester. Since its inception, Textbook for Troops has granted more than 3,500 students the necessary materials needed for proper schooling. Books are shipped nationwide and around the world to aid WKU students who are veterans, as well as military students and their dependents.

WKU Military Student Services also provides other services, including support and guidance with tuition assistance requests for all branches of the military.

WKU also offers a discounted tuition rate of $250 per credit hour to all active duty, reserve and National Guard members. This offering is also available for graduate student use.

“It is an honor to serve those who are serving our country, or who have served it through their time in the military, and we want to help them in any way that we can,” Johnson said. “Our military and veteran students come to us with a vast amount of knowledge and experience from their time in the military and life in general. When they bring this with them to the learning environment, it adds a positive benefit for all.”

WKU also been designated as a "Military Friendly School" every year since 2009 by Victory Media. For more about WKU’s programs for veterans and military personnel, visit https://www.wku.edu/veterans/

For more about the Best for Vets rankings, visit https://colleges.militarytimes.com/