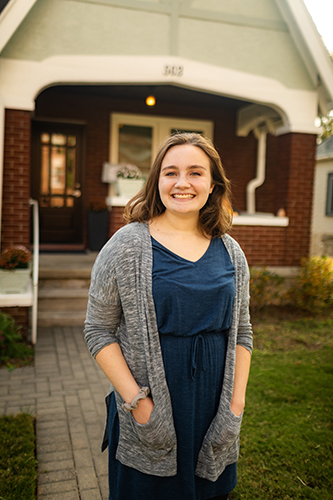 WKU senior Elaine Losekamp, an agriculture major from Bowling Green, became interested in food recovery after attending the annual conference of the Association for the Advancement of Sustainability in Higher Education in 2018. During the conference, Losekamp learned about the Food Recovery Network (FRN), a national nonprofit organization dedicated to reducing food waste and donating perishable items to those in need.

“I was impressed by how impactful FRN’s work is and was inspired to start a chapter at WKU. I started working to create an FRN chapter in 2018 through meetings with advisors and the WKU Restaurant Group. Beth Gafford and Courtney Martin, two employees in the WKU Resource Conservation Department, guided me through the process of getting the chapter up and running,” Losekamp said.

In 2019, Losekamp officially founded WKU’s chapter of FRN, a student-run service organization that rescues surplus food from campus dining locations that would otherwise go to waste. Student volunteers visit dining facilities around campus, such as Einstein Bros. Bagels, throughout the week to pick up food.

“In our two years of existence, over 50 students have recovered food with WKU Food Recovery. This semester, 28 students have volunteered at least once with the organization,” Losekamp said.

The chapter recently celebrated a milestone – since the organization’s founding, over 5,000 pounds of food has been recovered from dining facilities on WKU’s campus. After collecting food, student volunteers give these perishable items to local nonprofit organizations. Through their work, students assist people who are experiencing food insecurity and engage with the local community.

Losekamp also shared that it gives students the opportunity to address environmental and sustainability issues they care about in a hands-on-manner.

Losekamp applies her experience in food recovery in her current role at Glean Kentucky, which recently expanded to South Central Kentucky.

“I have admired Glean Kentucky’s work for a long time, so when I saw that they were hiring a Field Coordinator I immediately applied,” Losekamp said.

Before serving as Field Coordinator at Glean Kentucky, Losekamp held positions at Top Crops, the Baker Arboretum, and Kentuckians for the Commonwealth.

“The jobs and internships that I have had throughout my time in college have helped me focus my interests. I have always been interested in the broad fields of agriculture and environmental science, but each job or internship that I have had has helped me focus my interests into the specific area in which I want to build my career,” Losekamp said.

Reflecting on her time on the Hill, Losekamp remarked on what the Hilltopper Spirit means to her.

“To me, the Hilltopper Spirit means giving back to and engaging with the broader community.”

Losekamp graduates this December, entrusting the legacy of her Hilltopper Spirit with the WKU chapter of Food Recovery Network.

WKU is making impressive progress in its 10-year strategic plan known as “Climbing to Greater Heights.” WKU’s Amy Bingham has an update in this week’s View from the Hill.

Registration has opened for the eighth annual IdeaFestival Bowling Green to be held online from 9 a.m. to noon CST Feb. 17.