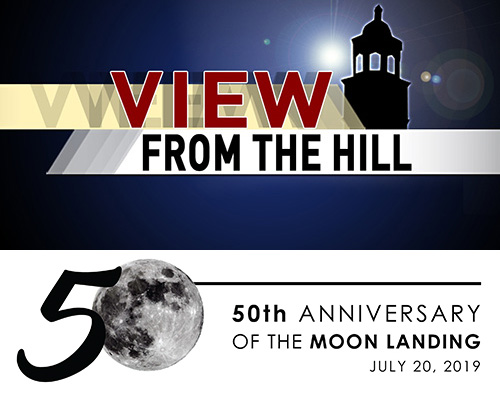 If you are a space enthusiast, or even if you’re not, WKU’s Hardin Planetarium is the place to be Saturday afternoon (July 20). WKU’s Amy Bingham has more on 50th anniversary celebration of the moon landing in this week’s View from the Hill.

“Watching the moment was spectacular.”

“One giant leap for mankind.”

“We were actually on another world for the first time, we’d actually stepped off this one.”

Now he shares his enthusiasm for space as Hardin Planetarium Coordinator.

“Our job is to engage them and get them to interact with the material around here and hopefully get them to learn something. “

Crowds have been getting larger for “First Steps on the Moon,” a free show that includes interaction with the audience.

“Try to understand the difficulty of actually doing this.  It wasn’t just oh ok let’s go to the moon.  It’s a hard target to hit.”

“When he took the earth and that little ball and put them so far apart, I didn’t realize the moon was so far away from the earth.”

“It’s more like more fun to see how and watch and learn more stuff about how they moved and were surviving and not dying.”

That kind of interaction will be part of Saturday’s Moon Landing Celebration.

“We’re going to have a real festival out here around the grounds and neighboring buildings here.”

A representational model of the lunar module is being built to display.

“It is to scale.  We’re trying to give people a sense of how big an area they traveled around in.”

Among the films being shown is Apollo 11 which never made it to Bowling Green theatres.

“It’s got original footage of the Apollo launch and moon landing that I don’t believe has ever been released before.”

A full day remembering a powerful moment in our nation’s

A number of departments at WKU are teaming up to make Saturday’s celebration happen. For a complete schedule of all the free activities, visit www.wku.edu/go/moonlanding.

Every fall, a full month is set aside to honor Hispanic and Latin Americans in the U.S. by focusing on their cultures and unique contributions to American society. Amy Bingham has more on how WKU has been celebrating Hispanic Heritage Month.