Veteran focuses on research during time at WKU 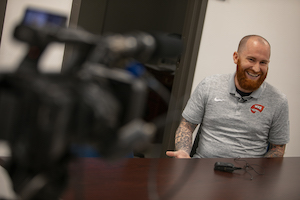 “I wanted to move away from treating the physical injuries of war,” said Jeffrey Powers, an Army veteran and WKU graduate student in the Department of Psychological Sciences.

Powers served as a medic in the United States Army with tours to Iraq and Afghanistan. In year four of his six years, he faced an injury while in Afghanistan in 2011  that caused him to need surgery and physical therapy. His last two years of military service was on the warrior transition unit.

“I realized that I didn’t want to treat the physical injuries of war anymore, but (knew) it was important to have veterans that continued their service maybe even outside of uniform. And, I wanted to treat the more mental injuries of war,” Powers said. “And, I thought that psychology would be a good way to do that.”

While stationed at Fort Campbell, Powers searched for professors nearby that were working on an issue that would be pertinent to veterans and active duty service members. “I found Dr. Amy Brausch, and I was lucky enough to be accepted into her lab,” Powers said.

Powers came to WKU for his bachelor’s degree in psychology and now in his master’s program has worked with Brausch for three and a half years. He is currently working with her on two studies includeing a National Institute of Mental Health longitudinal study of adolescents examining self-harm and suicide and a National Institute of Health longitudinal study of self-harm and suicide in college students.

“The groundwork for thinking about suicide and self-harm can be laid down as an adolescent,” Powers said.  “I thought it would be important to understand how these things develop to better understand how we can treat it moving forward.”

For their current research Brausch and Powers study high school students and college-age students. Long term, Powers believes this research will help with understanding the root of suicide so he can better support veterans. His thesis is titled Explicit and Implicit non-suicidal self-harm in young adults

Upon completing his Master of Science degree this summer, Powers will continue his studies at Louisiana State University in the fall pursuing a clinical Ph.D. in Psychology.

Learn more about Powers in this week's View from the Hill.