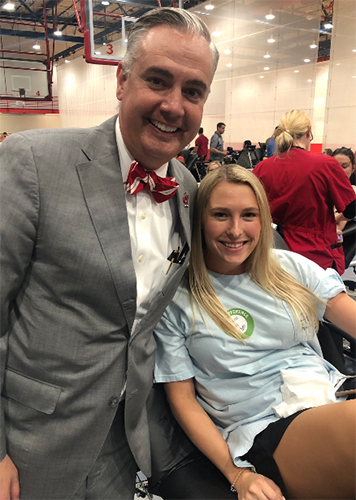 Each year, WKU Greeks host their annual Greek Week, a week filled with various competitions where chapters compete against one another for bragging rights. Two philanthropic competitions, the Greek Week Blood Drive and CanStruction Food Competition, made major impacts in the Bowling Green community and southern Kentucky region.

This year’s blood drive competition raised 1,490 pints of blood for the American Red Cross. This blood drive is the largest in the Kentucky/Tennessee area and is one of the largest for the Red Cross in the entire country; this blood drive has taken place for over 40 years and has been a major part of Greek Week.

Andrew Rash, WKU Greek Advisor, noted, “The 1,490 pints is the most pints in eight years and is one of the top amounts we’ve ever collected.”

“The amount of cans our Greeks have been able to raise is absolutely phenomenal,” Rash said. “I’m so impressed by the difference our Greek men and women keep making for Bowling Green and surrounding communities.  I look forward to continuing this amazing Greek Week tradition.”

View from the Hill: Spirit Masters adapt amid COVID limitations

For nearly 40 years now a group of student ambassadors at WKU has helped promote the school?s spirit of hospitality and inspire other students to strive for excellence.

WKU senior reflects on collegiate experiences, opportunities and the importance of internships.

During her time on the Hill, Jinsey Stinson has been involved in numerous student organizations. ?These organizations have grown me professionally and challenged me, but they?re a lot of fun too," Stinson said.