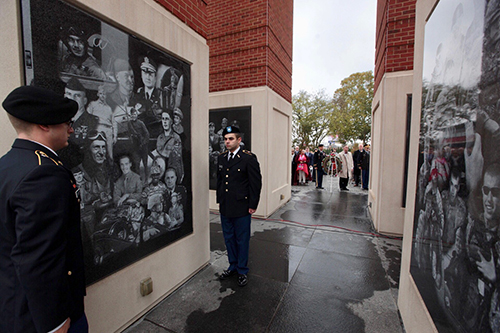 "In honor of the 100 year anniversary of the ROTC program at WKU, we are pleased today to unveil a new panel for the Guthrie Bell Tower -- featuring 18 more images symbolic of our military heroes," President Timothy C. Caboni said at the Nov. 9 ceremony. (WKU photo by Clinton Lewis) More images available on WKU's Facebook page.

“Today, we pause to reflect on the freedom that each of us enjoys – freedom that indeed is not free,” WKU President Timothy C. Caboni said. “We remember the tremendous cost that has been paid as we recognize the service and sacrifice of our nation’s military veterans. What we know is that each of us, in some way, endeavor to make a difference and to make the world a better place. The path that we choose to do so varies greatly, but we know that the price our veterans paid came at a higher cost than most.

“Here, at the Guthrie Bell Tower, we look upon the images of those who sacrificed so much in order for us to live freely. Some gave all, including the tower’s namesake, Robert Guthrie. In honor of the 100 year anniversary of the ROTC program at WKU, we are pleased today to unveil a new panel for the Guthrie Bell Tower -- featuring 18 more images symbolic of our military heroes.”

“Without walking in their shoes, we cannot understand the trials and the hardships they endured as they served, fought for and protected our nation.” President Caboni said. “They demonstrated the epitome of selflessness and loyalty to our country, and we remain grateful for each of them. I hope that all who pass by, and each who sees this tower from a distance, are reminded of the service, bravery and sacrifice of all of our veterans around the globe.”

Lt. Gov. Jenean Hampton congratulated WKU on the 100th anniversary of ROTC and thanked veterans for their service.

Hampton also encouraged veterans to share their stories with family members and others. “Those stories are starting to disappear,” she said. “We know that many veterans don’t talk about what they did in the service. Whether you did something heroic or not, you played a role in shaping this nation and keeping this nation free.”

President Caboni and LTC Thomas MacMillin, head of the Department of Military Science and Leadership, unveiled a replica of the new panel then participated in the wreath-laying ceremony.

Following the ceremony, the ROTC Hall of Fame Induction Ceremony and Luncheon was held at the Jack and Jackie Harbaugh Club at Houchens Industries-L.T. Smith Stadium. The 2018 inductee was LTC Michael R. Kenney, a 1964 WKU graduate who retired from the U.S. Army in 1990.