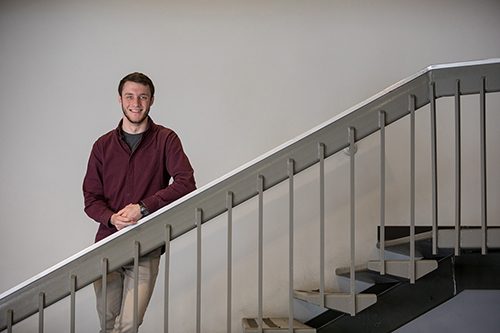 We will turn back around
Bitter, yet unaffected.
But rivers cannot return to their sources.
The glacier will join its siblings
In the sea.

As part of WKU Choral Activities’ Earth Day concert on Sunday (April 22), the WKU Chorale will present the world premiere of Icelandic Sketches: Stories of Climate, Tourism and Change, a composition by senior Jason Fox of Russellville.

Fox is a Joint Undergraduate-Master’s Program (JUMP) student in the WKU Center for Human GeoEnvironmental Studies (CHNGES) and Department of Geography and Geology. He’s also a student in the Mahurin Honors College.

“My two majors are music and environmental science. I had to do an Honors thesis, and I thought why not try to combine those two,” Fox said.

“I tried to think of what kinds of methods I could use to combine these two majors because I think they both represent me equally. To start, I can compose—that’s something I can do on the music side, and when you compose you can incorporate whatever kind of material you want. I had all these stories from my travels in Iceland about the topics I’m interested in, which are climate change and tourism, how tourism affects the environment, and how these issues are interwoven in Iceland and across the Arctic as a whole.”

Fox made his first trip to Iceland in 2015 as part of a study abroad course on climate change and returned in the summers of 2016 and 2017 as he continued research into sustainable tourism.

He also began compiling the stories and writing the poems that became Icelandic Sketches: Stories of Climate, Tourism and Change, a three-movement piece that portrays the environmental challenges associated with Icelandic tourism.

“People always give me a pleasant yet surprised reaction when they think I’m just a music major or just an environmental science major and then I list the other one. But it’s worked out well,” Fox said. “I’ve always thought I could use that combination creatively and do a unique project that no one else can do. I like to think I’ve pulled it off as best that I can.”

The first movement captures the idea of last-chance tourism as “more and more people go to places like Iceland to see features like glaciers that are diminishing because of climate change,” he said.

The second movement follows tourists on a glacier hike who are stopped by a meltwater channel that has formed. “The tourists can just turn back around, but the glacier just keeps melting and melting,” he said.

The third movement is based on the story of a fishing town that has turned to tourism to replace a fishing industry that was impacted when fish moved due to changing ocean temperatures. “That story really moves me,” Fox said.

Fox also is using the composition to evaluate the potential of music to communicate science-based concepts to performers and audiences. Before the WKU Chorale started learning and rehearsing the composition, Fox asked the singers what they already knew about Iceland and the environmental issues there. After the Earth Day performance, he will survey the singers again and ask what they know about Iceland at that point.

“Those three stories are embedded in this piece,” he said. “The research portion of that is how the singers in the WKU Chorale learn and interpret the content that I’ve embedded within this music.”

Fox has composed other instrumental musical pieces, but he is excited and nervous as the world premiere of his first original piece of words and music approaches. “It worked out well that I have done voice as my music concentration because I already had that background to draw from when writing this choral piece,” he said. “The choral element also works well for my goals as an educational, communicative piece. It would be harder if it were purely instrumental music to tell the same stories—a different method behind the writing would be necessary.

“Any time your own composition is put out in public it is scary, but it is also exciting because you don’t know how people will react. You have to be confident in your stories and your music, and you just have to trust that you’ve done the best you can. And then enjoy the result.”

Fox, who will complete his undergraduate degrees in May, isn’t sure what the future holds after he finishes his master’s degree next year. “I’ll keep doing music no matter what I do in environmental science. I don’t think I’ll ever be able to give that up.”

Fox admits “it would be difficult to make a career out of doing this sort of project over and over and over. But wouldn’t it be awesome if I could keep going to different countries and looking at environmental issues and then sharing them through music. That would be fantastic.”

The WKU Choirs concert will be held in Van Meter Auditorium at 3 p.m. on Earth Day, April 22. Tickets will be available at the door for $5 general admission or $3 with a valid student ID.