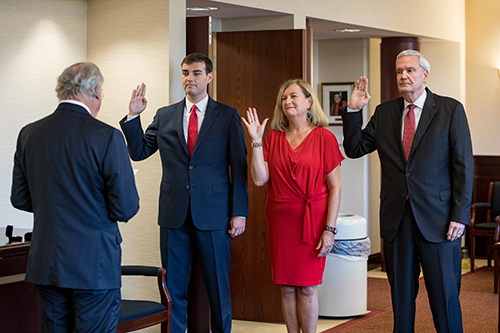 During its third quarterly meeting of the calendar year Friday (August 12), the Western Kentucky University Board of Regents approved a new name for the ROTC Physical Training Facilities located at the Charles M. Ruter Track and Field Complex. The facility will be known as Century Park in honor of the 100th class of WKU Hilltopper Battalion 2nd Lieutenants, who were commissioned in the 2021-2022 academic year. Each year, approximately 15 WKU students complete the Army ROTC program and earn commissions as U.S. Army Officers. The Army ROTC program at WKU is one of the oldest in the state.

Also, three new Regents were recognized by Chair Phillip Bale. Melissa Dennison of Lexington, Gary Broady of Franklin, and Cole Bornefeld of Hendersonville, Tennessee, all formally took the oath of office during a special called meeting of the Board of Regents in July.

In other business, the Board of Regents:

The Board of Regents will next meet on October 21, 2022, to conduct Committee Meetings.