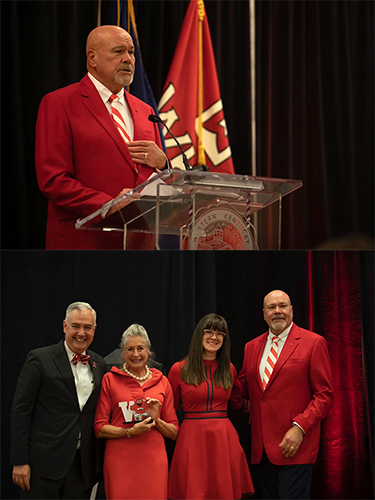 An event was held Friday (April 22) to recognize and celebrate Eva and Jim Martens.

Longtime supporters of Western Kentucky University, the Martenses most recently made a commitment of more than $5 million to benefit the WKU Alumni Center, Men’s Basketball, Football and the Hilltopper Athletic Foundation through both current support and a provision in their estate plans. In recognition of their gift, the Eva and Jim Martens Alumni Center was named in their honor.

Jim Martens (’72), who was raised in the small town of Bellevue, Mich., was interested in agriculture and was accepted to Michigan State, which was only 40 miles from his hometown. He credits Mr. Donald Hoebeke, his high school Industrial Arts teacher who was a 1947 WKU alumnus, for encouraging him to consider WKU.

“He was a tremendous influence on me and so many other young men in my hometown,” said Jim Martens. “Even though I was already accepted into Michigan State, he kept talking about WKU.”

Two of his former classmates had already followed Mr. Hoebeke’s advice and were freshmen at WKU making plans to go home to Michigan for spring break. Martens hitched a ride south with their parents so he could visit the WKU campus.

“During my three-day visit I met Billy Adams, a Professor in the Department of Agriculture, who really excited me about WKU,” said Jim Martens. “People were friendly to me for no reason and welcomed me.

“The timing when the seasons change is a little ahead here than in Michigan, and in Kentucky people were already mowing their grass, girls were laying out in the sun and the wild onions were blooming,” Jim Martens said. “I was thinking about my experiences on campus while we were driving home. As we got to the Michigan state line, there was snow trickling down, and the light switch flipped. I said, ‘I’m going to Western.’ And the second time I came to campus I brought a suitcase and a garbage bag full of all my belongings.”

Martens originally planned to return to Michigan after graduation, but he just couldn’t leave.

“I didn’t want to leave Bowling Green,” Jim Martens said. “Even though I didn’t have any great job opportunities and I wasn’t well connected, I stayed here. I love Western and I love Bowling Green.

“There are few people who will change your life,” Martens added. “For me, that was my mom and dad, Mr. Hoebeke and Billy Adams. The welcoming spirit of Western Kentucky University that I found more than 50 years ago is still alive and well.”

And through their belief in serving their community and helping others, the Martenses have ensured that current and future Hilltoppers find that same spirit at WKU.

During the celebration, Eva Martens received a surprise designation of Honorary Alumna.

“In very special cases, individuals who have demonstrated outstanding leadership and service to WKU may be considered alumni even if they do not hold a degree from WKU,” said Anthony McAdoo, Executive Director of the WKU Alumni Association. “It was my privilege to bestow upon Eva the official title of Honorary Alumna in recognition of not only her philanthropic commitment but also her advocacy and support of WKU in our community.”

“I have never been so excited, and my heart was racing,” Eva Martens said of receiving the award. “My heart is so full, and I’m very thankful.”

Athletics season ticket holders for 50 years, the Martenses love WKU Football and Basketball and supporting student-athletes through the Hilltopper Athletic Foundation. Todd Stewart, Director of Athletics, also shared how the Martenses’ support goes beyond their philanthropy.

“In WKU Athletics, we have a saying that you are the company you keep,” Stewart said. “Eva and Jim, when I look at this room that is standing room only, that’s the company you keep. You attend sporting events, and you support our teams and programs. But you care beyond the outcome of a game. You genuinely care about the people.”

“The support from Eva and Jim launches a new era of the Alumni Center and reinvigorates the work that we do to connect more than 120,000 alumni and friends in a meaningful with the institution,” said Amanda Trabue, Vice President for Philanthropy & Alumni Engagement. “As this building signifies the beginning of one’s journey at WKU, we know that thousands more will be forever changed by the ‘welcoming Spirit’ – woven into the fabric of this University – that Jim felt when he first stepped foot on this campus.”

Jim Martens is a commercial real estate investor who owns shopping centers in Kentucky, Tennessee and Indiana. A current member of the WKU Foundation Board of Trustees, the Hilltopper Athletic Foundation and the WKU Real Estate Corporation, he is also a past member of the Football Endowment Committee. In addition, he has served on several local boards and civic organizations in Bowling Green.

The Martenses are Lifetime Members of the WKU Alumni Association with 50 years of giving to the University. They have four children, all of whom are WKU alumni: Brad Martens (’99), Cassie Martens Turner (’01, ’04), Tammy McCoy Sheets (’89) and Kevin McCoy (’93). Additionally, three of their children’s spouses and one granddaughter, Katelyn McCoy Mason (’18), are also WKU alumni.