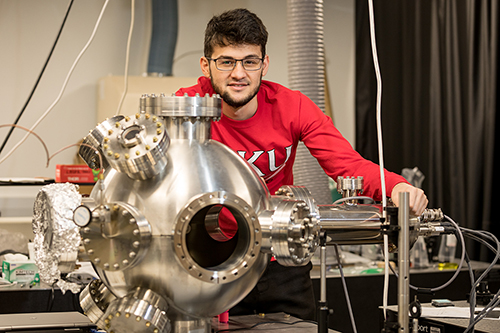 Somon Hakimov graduates with a Master of Science degree in Homeland Security Sciences this May. He spent the last two years working in the lab of Dr. Ali Oguz Er, Associate Professor in the WKU Department of Physics and Astronomy.

Hakimov’s thesis focuses on the synthesis of silver nanoparticles that are later combined with a dye compound, methylene blue, to create an anti-microbial agent. Hakimov and his research group tested this combination on bacteria such as E. Coli to measure its anti-microbial activity. Remarkably, their findings showed that it is 100 times better than methylene blue or the nanoparticles used alone. This has potential application for more effectively treating open wounds, prosthetic joint infections and tumors.

Hakimov is from over 7,000 miles away from Bowling Green in Dushanbe, Tajikistan, the capital city in the smallest country in central Asia. He comes from a large family where he has five siblings, 18 aunts and uncles and nearly 100 cousins. Hakimov became interested in chemistry while in high school and then attended the top university in his country, Tajik National University, to study chemistry. He learned of WKU from friends in Dushanbe who had also attended WKU.

In his next chapter, Hakimov will be attending the University of Tennessee at Knoxville where he was accepted into a Ph.D. program in chemistry. He plans to study computational chemistry.

While Hakimov gained extensive knowledge on making silver nanoparticles and how to use them, he also obtained valuable skills as a professional. He mentored undergraduates in the research lab, built confidence in his writing and public speaking skills and learned how to work smarter in general. Hakimov said his time at WKU helped build his perseverance significantly.

“The support of the WKU community is so strong and helped make big improvements in my life. If not for WKU, I probably would not have built the confidence to pursue a Ph.D.,” said Hakimov.

When he wants to relax, Hakimov enjoys gathering with his friends at the Baptist Campus Ministry (BCM) to hang out and play chess or ping pong. As a dedicated science graduate student, Hakimov doesn’t often have time to enjoy the outdoors, but he was able to go on a kayaking adventure with some of his co-workers last year. While on the water, his kayak flipped and he lost his phone in deep muddy water. A few months later someone found his phone (in working condition) and called him up to arrange its return.

When asked to reflect on the WKU motto, The Spirit Makes the Master, Hakimov said that he felt like “it doesn’t matter where you are from or what you look like, as long as you have that spirit, you will succeed.”