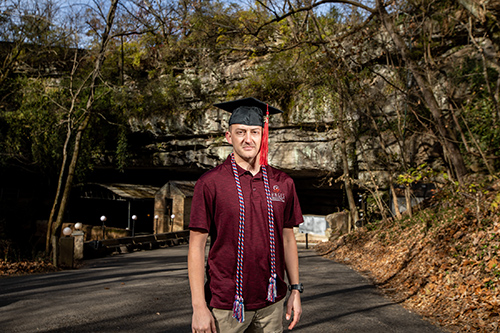 “During my years as a WKU student, I was fortunate to have experiences that truly molded me into the person I am today,” said James Troxell, a Monticello graduate student completing his Masters of Geoscience degree in the Department of Earth, Environmental, and Atmospheric Sciences from WKU this December 2021.

Troxell earned his Bachelor of Science degree in Geography from WKU in 2017 before returning for graduate school. As a member of the Kentucky National Guard, they paid for his undergraduate degree. “When I found out the National Guard would also pay for a master’s degree, I decided to return to the Hill to work with professors I had met previously.”

With the support from his professors, Troxell gained valuable experiences and environmental sciences, and his research is already making an impact.

“JT’s work is the embodiment of applied learning and research. He took basic knowledge learned through his undergraduate experience and expanded upon it through his graduate work to address real problems facing Bowling Green and other communities built on karst landscapes,” shared Dr. Leslie North, Interim Chair, Department of Earth, Environmental, and Atmospheric Sciences and Associate Professor of Environmental Studies.

Troxell worked with North as well as Dr. Jason Polk, the director of the Center for Human GeoEnvironmental Studies (CHNGES) and the HydroAnalytical Lab.

“The Center for Human GeoEnvironmental Studies (CHNGES) played a main role in my experience. Through CHNGES I was able to gain knowledge and work hands on with the equipment and software in the field that I may use once I get into the industry with my job,” Troxell explained. “I was also able to cross train and learn new skills by helping out with other projects CHNGES was involved in, some of which in cooperation with the City of Bowling Green Public Works Environmental Compliance Division.”

Troxell interned at the Bowling Green Environmental Compliance Division under the supervision of Matt Powell. There he experienced the intersection between environmental science and government.

“I was able to spend time in the field taking compliance water samples and seeing how the City of Bowling Green protects the environment and the citizens that live here,” Troxell said. “During the beginning phase of my thesis project in spring 2019, I was able to assist in the response to a state declared emergency as a member of the City of BG as well as CHNGES, where we investigated a gasoline spill which led to a new cave discovery within the city.”

As a result of Troxell’s thesis project, the City of Bowling Green and Bowling Green Fire Department started implementing changes to their operations.

Troxell explained, “These changes will increase their ability to respond effectively to HAZMAT spills that enter the groundwater and prevent further negative effects of spills on the environment and public health in the city.”

Seeing his work already being used could be the highlight of a student’s collegiate experience, but Troxell acknowledged that the connections he has made mean the most.

“I’ve traveled to Iceland on study abroad, worked as a resident assistant for multiple years, attended and presented at numerous professional conferences, and made connections with many people personally and professionally. If I had to sum it up, I would say the best part about my WKU experience would be the connections I’ve made with other people. I have learned that every individual has something to contribute and if you grow your network, you can solve anything life throws at you.”

He added, “The Guard shaped my experience in a positive but unique way. I enlisted in 2013 and since then I have had to learn how to balance my studies and my obligations to the Guard for both my undergraduate and graduate degrees, especially during COVID. I was on active-duty orders with the guard for a little over four months for various reasons during 2020 which significantly delayed my progression and completion of my degree, however through the activations, I was still able to observe and learn how emergency management operations are conducted which was a large part of my master’s thesis project.”

After graduation, Troxell plans to continue serving in the National Guard and pursue a career in the environmental field potentially at the state level in Frankfort.

To learn more about earning a masters degree in Geoscience at WKU, visit https://www.wku.edu/eeas/graduateprogram.php.

Here is a listing of WKU events for Tuesday, May 17, through Saturday, June 4.

WKU graduate is driven by a passion for military and business

Lee Friedman from Princeton, Indiana, has always been passionate about the military and small business, so it was no surprise when he chose WKU's Gordon Ford College of Business and the WKU Army ROTC program.