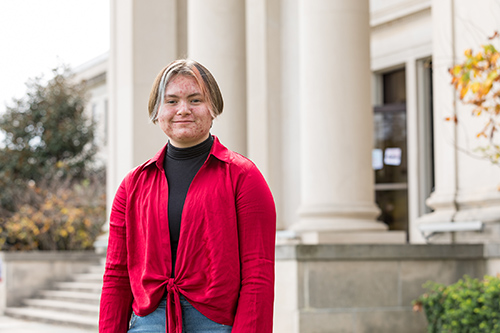 At the age of 15, Joseph Shoulders moved from Adairville to Bowling Green to attend The Gatton Academy of Mathematics and Science. Coming from a small town, Shoulders was astonished by the new, vibrant culture he was surrounded by.

“I had never met anyone who wasn't Christian before that,” Shoulders said. “My family didn't even have a conception of what it was to be transgender. When I came out to my family, they just had never heard of it. Talking to people who understood what it was, and also thought of it positively, was very impactful on my mental health.”

Deciding to stay at WKU to complete a bachelor’s degree was an easy decision for Shoulders, thanks to supportive professors.

“I had Professor Rutledge for English 200, and it was the first time that I studied literature formally,” Shoulders said. “I basically fell in love with it because there it was a whole new way of thinking. I turned in my final essay and Professor Rutledge pulled me aside and said that he was really impressed by my work that semester and that I should consider being an English major.”

Professor Rutledge encouraged Shoulders to register for a 400 level English course, which enabled him to learn more about what WKU’s English program was like.

“The English community is extremely welcoming. No matter what your career plans are, people are really supportive of it. We also see the value of academia, so it’s like you know there's no goal that's worth more or less. We just want to support you in getting educated and thinking about language and culture critically.”

In Fall 2019, after graduating from the Gatton Academy, Shoulders decided to major in English with a concentration in Literature. He also has minors in American Sign Language and Creative Writing.

Now a junior at WKU, Shoulders is an active member of the English Student Advisory Team (ESAT). ESAT is a student group that attends and plans events as representatives of the English Department. One of Shoulders’ favorite events for ESAT was Head for the Hill — an event where high schoolers asked different WKU departments about their degree programs and opportunities.

“There was this one high school girl in particular who seemed really passionate about literature and writing,” Shoulders said. “I talked to her for like 20 minutes straight about everything that we had — the publications she could be a part of, classes she could take — and then gave her some contact information for professors. She took a copy of The Ashen Egg, and my paper was in there. I pointed it out to her and she said, ‘I'm going to read this.’ Before she left the event, she read the essay and came back to me and told me that it was really good, and that she would love to be able to write a paper like that one day.”

The Ashen Egg is an annual journal publishing analytical essays on literature, rhetoric, linguistics, film, and popular culture from WKU students. The journal is a great opportunity for students to share and their academic writing outside of the classroom. For many students, The Ashen Egg is also the first place where their writing has been published. In 2021, Shoulders’ essay about queer theory in a medieval text was accepted and published. He argued that the main character of Silence, a medieval poem he discovered in Dr. Langdon’s Medieval Literature course, was an early representation of a transgender character.

That same essay was also accepted into the 2020 Undergraduate Conference on Literature, Language, and Culture. The conference is an annual event sponsored by the WKU English Department with support from the Provost's Initiatives for Excellence. The conference features original analytical essays written by undergraduate students in a WKU English class during the year leading up to each conference. Shoulders was also accepted into the upcoming conference that is taking place on November 12th. Presenting his piece in front of peers and professors offered Shoulders a huge confidence boost.

“I was really nervous to present because I guess I’ve always had this idea that queer theory wasn't academic or accepted in academia,” Shoulders said. “I thought I wouldn't be taken seriously. But when I presented, I saw a lot of people were really interested in what I was saying, and I got a lot of engaging feedback. They really inspired me to go further with it.”

Shoulders hopes to be a novelist after getting his masters in English and a PhD in literature. During his time at WKU, Shoulders has studied what makes his favorite books impactful – such as Emily Bronte’s Wuthering Heights -- and has applied those techniques to his own fantasy stories. Reaching out to professors has also helped him connect his studies to future goals of publishing a successful novel.

“I went to Professor Rutledge because I wanted feedback on a short story I had written,” Shoulders said. “He does not usually read fantasy, but he still offered a lot of inspiration because he connected it to classical literature techniques, like free indirect discourse.”

Shoulders is also currently a tutor in the Writing Center in Cherry Hall. Last summer, he was the English department’s student worker, and for the 2020-2021 academic school year, he was their profile and story writer intern. During his internship last year, Shoulders wrote news articles about English events and created social media campaigns. For example, during Hispanic Heritage Month and Black History Month, Shoulders highlighted Latinx and Black authors on social media.

After all his involvement and experience, Shoulders’ biggest piece of advice for students of any major is to connect with professors.

“Both because of the pandemic and also some weird generational shift, students don't seem to want to talk to their professors at all,” Shoulders said. “But it is really important, because they tell you about the opportunities available to you — careers you can go into, what graduate schools you might want to think about, and they might have more encouragement for you in a less formal setting than the classroom. It's also really good to learn about their experiences.”

For more information on a degree in English, visit wku.edu/english

Featured Articles
For White Squirrel Weather, tornadoes are 'the kind of thing we have been training for'