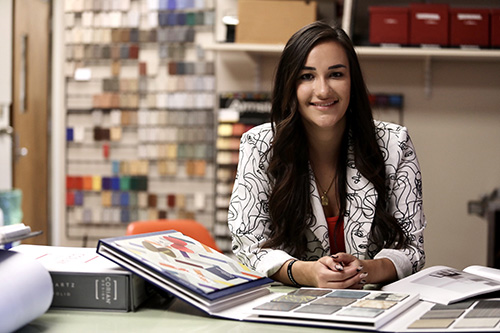 For WKU Interior Design and Fashion Merchandising major Anya Shah, the Hilltopper Spirit means one word, “community.” The thirty-one-year-old, non-traditional student from St. Louis, has made her mark on campus by serving as president of the WKU International Interior Design Association (IIDA), where she has found a community.

While IIDA has been on WKU’s campus for over 25 years, Shah, along with the help of other WKU IIDA members, brought the group to “Campus Center” status with IIDA. According to the association, IIDA Campus Centers are an invaluable part of the design community that offers students, educators, and design professionals an opportunity to work together on different projects and initiatives.

This exchange of ideas and creative development between young and emerging designers as well as established industry leaders is essential to driving innovation and shaping the future of interior design. Establishing Campus Center status has given WKU IIDA members the opportunity to receive scholarships and participate in award winning competitions.

Sheila Flener, WKU advisor of IIDA and Interior Design faculty member, said, “Anya is a happy person, and it rubs off on everyone around her. I love her enthusiasm and drive to get things accomplished, which made her instrumental in securing campus center status for WKU IIDA.”

According to Shah, “IIDA is important to me because it helps Interior Design students branch out into the field of Interior Design, meet professionals, and create a community network. I want to be a mentor to other students interested in the field and department.” Being president of IIDA has given Shah that opportunity, and she has been able to learn more about people and get to know her professors as well. Shah said, “This has built a community that I have thrived in, and I would not be where I am without it.”

Travis Wilson, Shah's academic advisor, and professor said, "I've had the privilege of teaching Anya in two degrees at WKU. Anya is always a bright spot in my day. In the classroom, she is always prepared and asks engaging questions. As an advisee, Anya's always searching for professional experiences to enrich her education. She's also a true leader looking for opportunities for herself, her classmates, and WKU. Anya is a shining example of what it means to be a Hilltopper."

For more information about majoring in Interior Design and Fashion Merchandising, click here.