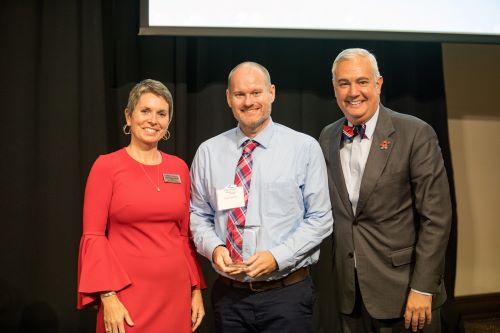 A 2003 graduate of CHHS with a Master of Public Health (MPH), one of the recipients, Mr. Jason Cummins, is the Director of Tennessee Department of Health TB Elimination Program, and was the first recipient of the CHHS Outstanding Graduate Student award.

After completing his MPH in 2003, Mr. Cummins began his public health career as an epidemiology surveillance coordinator at the Unified Government of Wyandotte County/Kansas City, Kansas Health Department. In 2008, Mr. Cummins accepted an epidemiologist position with the Tennessee Department of Health TB Elimination Program and, in 2014, was promoted to Program Manager/Senior Epidemiologist, where he was responsible for quality assurance for all statewide TB data in additional to being the lead for program evaluation activities. He was promoted to Director in April 2022.

Mr. Cummins has received numerous awards and accolades for his work in TB elimination and has served in national leadership positions including president of the Society for Epidemiology in TB Control (SETC) and the CDC’s Outbreak Detection Workgroup for Tuberculosis. He has taught several courses at the Southeastern National Tuberculosis Center and co-authored refereed journal articles on delays incompletion of TB treatment and risk factors for recurrent TB in low-incidence settings. His work in public health has taken him across the nation to present on topics such as TB genotyping and surveillance, as well as to work in the field, as he did with clinicians in Mississippi during the aftermath of Hurricane Katrina and in mobile vaccination clinics during the COVID-19 pandemic.

In 2019, Mr. Cummins was named Distinguished Alumnus by WKU’s Department of Public Health based on his exemplary career in public health, which merits recognition and reflects positively upon CHHS and WKU.

Cummins shared, "It was truly an honor to be a recipient of the first annual Alumni Achievement Award.  The education I received and the guidance from my mentors within the Department of Public Health at WKU provided me with the foundation needed to build a successful career in public health.  In my professional career, I strive to exemplify the mission, vision, and core values of WKU’s College of Health and Human Services.  I want to thank those that selected me for this award as week as thank the entire faculty of CHHS at WKU for their commitment to developing students into leaders in the health and human profession."

The recipients of these awards were nominated based on the following criteria: A graduate of CHHS who has made outstanding achievement in one or more of the following areas: 1) professional accomplishments related to our CHHS mission, 2) demonstrated leadership within a workplace, organization, or professional association, 3) unique and substantial public service or community-engagement, and/or 4) career success and efforts which merit recognition and reflect positively on CHHS and Western Kentucky University.

Public Notice of Upcoming Accreditation Review Visit by the ACEN

Western Kentucky University’s School of Nursing and Allied Health wishes to announce that it will host a site visit for continuing accreditation of its LPN to ASN Program by the Accreditation Commission for Education in Nursing (ACEN).