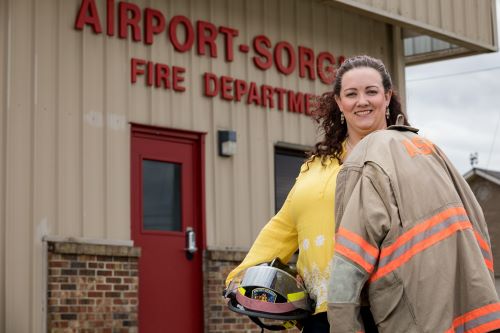 Ashley Adams, a WKU graduate student from Owensboro, became a volunteer firefighter in 2018 for the Airport-Sorgho Fire Department. Adams is a first-generation college student set to receive a Master of Environmental and Occupational Health Science Degree in December 2022. Adams is supported through a scholarship from the WKU NIOSH Training Program Grant in the Environmental and Occupational Health Science graduate program.

“I chose WKU because of the previous research they had done with firefighters and my supervisor, Mac Cann, also teaches at WKU,” Adams said.

WKU’s Center for Environmental and Workplace Health (CEWH) has conducted research with the Green River Firefighter Association, in the northwestern region of Kentucky, for several years. Much of their research involves the examination of health behaviors and cancer risks among firefighters.

Adams shared, “I was able to provide outside input on the previous cancer study (before I became a student), and that began my relationship with the Department of Public Health at WKU.”

When asked how her involvement in a research project impacted her learning and experience at WKU, Adams responded, “The classes I have taken during my time at WKU have directly related to my full-time job at a state environmental agency, my work at the fire department, and my research within the fire service. I was learning about Community-Based Participatory Research while actually conducting it, and it allowed me to share real-life experience with my fellow students.”

During Adams’ academic career, the COVID-19 pandemic spread globally, and she witnessed first-hand how the pandemic affected first responders; she wanted to be involved with research that touched on this impact. To accomplish this, Adams is working on a grant-funded project through the National Institutes of Environmental Health Science titled, “Firefighter Practices and Exposure in Response to COVID-19 in Northwestern Kentucky.” As part of the project, Adams is collaborating with Dr. Edrisa Sanyang, Assistant Professor of Public Health, Co-Director of the CEWS, and EOHS Graduate Program Coordinator; Dr. Gretchen Macy, Associate Professor of Public Health and Co-Director of the CEWS; and Dr. Ritchie Taylor, Professor of Public Health and Faculty Fellow for Research and Creative Activity.

“Ashley made our work on a community-engaged, hard to reach population, easier and our collaboration with Green River Firefighter Association stronger,” said Dr. Sanyang. “She knows almost every career and volunteer firefighter in the 90 fire departments in Northwestern Kentucky. She didn't only share her professional experience during the design and implementation of the project but went above and beyond to have a six times higher survey response than originally planned. I wish the Department of Public Health and CEWH can have more research and field-ready students like Ashley.”

Additionally, Adams shared, “The fire service is a big family, especially in Kentucky, and I am thankful to be a part of the Green River Firefighters Association (GRFA) family. This was the second research study WKU conducted in conjunction with the GRFA, and so many firefighters throughout the region participated (we tripled our initial goal for surveys) over the course of five months. With every mile I drove and every station I visited (44 total), the more focused and dedicated I became.”

While discussing the relationship between the university and firefighters, Dr. Macy stated, “Firefighter research is a priority for the Center for Environmental and Workplace Health and Environmental and Occupational Health Sciences Programs at WKU. Multiple studies over the past seven years have examined various aspects of firefighter health. Community engagement and application of research findings are at the heart of what we do. Having Ashley come on board as both part of the research team and a firefighter has been paramount in allowing us to expand the ways we can reach Kentucky firefighters. Her involvement is instrumental to the ongoing success and mutually beneficial relationship we share with the firefighter community.”

As for her plans after graduation, Adams will continue her work as an Environmental Scientist for the Kentucky Division for Air Quality in the Owensboro Regional Office, as well as her volunteer firefighter career. “I'm also hoping to continue being involved with firefighter research projects through the university.”

To learn more about a degree in Environmental and Occupational Health Science, visit https://www.wku.edu/publichealth/bs_in_ehs.php

The Centers for Medicare and Medicaid Services and the Kentucky Office of Inspector General awarded the University of Kentucky a 3-year, Civil Money Penalty grant to purchase a license to implement Bingocize® in 30 Certified Nursing Facilities across KY.

Cassidy Ratterman, a CHHS graduate student, is completing her third and final clinical rotation at Frazier Rehab Institute in Louisville, KY. She is working towards her Master of Science degree in Speech-Language Pathology (SLP).

The Centers for Medicare and Medicaid Services and the Kentucky Office of Inspector General awarded the University of Kentucky a 3-year, Civil Money Penalty grant to purchase a license to implement Bingocize® in 30 Certified Nursing Facilities across KY.