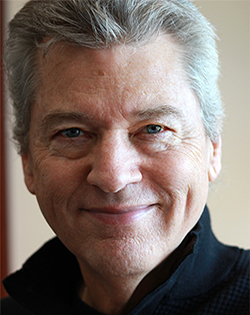 Loup Langton served as Director of the School of Journalism & Broadcasting at Western Kentucky University from 2011 until 2017 and has recently been appointed as the School’s Turner Professor. His career reflects a balance between professional and creative work as well as research with a particular passion for Latin America. His book, Photojournalism and Today’s News, continues to receive excellent international reviews and is used in college classrooms across the Americas and Europe.

Langton and Ecuadorian friend Pablo Corral Vega created and direct the POY Latam visual journalism contest that is the largest and most prestigious contest of its kind in Ibero America. More than 1,900 photographers entered the most recent POY Latam contest that was judged in Barcelona, Spain during the week of May 21, 2017. Langton and Corral also co-directed the highly successful Descubriendo Ecuador book project and have organized a number of prestigious workshops throughout Latin America.

As Director of Photography for Copley Chicago Newspapers, Langton helped lead a team that twice produced the Pictures of the Year International Newspaper Photographer of the Year, and as Director of Visuals for the newspaper El Universo, he helped change the concept of visual storytelling in Ecuador.

Since 2005 the international photojournalism organization, World Press Photo, has invited him to Amsterdam each year to interview their annual photojournalism and multimedia award winners. The interviews are featured on the World Press Photo website and have won multiple awards. As a freelance photographer and editor Langton contributed to several photographic books and was published in numerous international publications. In addition, his work has appeared in exhibitions in New York and Washington, D.C.