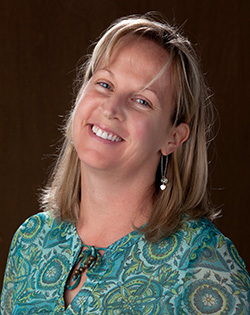 When Jeanie Adams-Smith left the Chicago Tribune in 2002 to take a position at Western Kentucky University, she was looking forward to sharing her expertise with students in one of the nation’s premier photojournalism schools.

Her 10-year career at the Tribune culminated with her in the position of national/foreign picture editor during the Sept. 11, 2001, attacks on the World Trade Center, which forever changed America. By then, Adams-Smith had already published a photo-documentary book on minor league baseball, and a multimedia piece on the children of divorce that won first place in Pictures of the Year International.

In the years since she joined the staff at WKU, powerful and affluent media outlets have collapsed or downsized and a “leaner and meaner” news industry is emerging in fast-paced and ever-changing web-based multimedia outlets. Adams-Smith is fully engaged in the technologies that drive these changes, while stressing that they are simply new tools that can help journalists accomplish their mission of gathering and communicating news in a professional and ethical manner.

Since arriving at WKU, Adams-Smith published two more books of social documentary photography and was named 2006 Photographer of the Year by the Kentucky News Photographers Association. The university nominated her book, Survivors: The Children of Divorce, the culmination of six years of work, for the Pulitzer Prize in nonfiction.

In the past several years, she has traveled twice to Cuba, documenting the everyday lives of people in Old Havana, a World Heritage Site as yet untouched by international commerce. She has also been to western Ireland to document family farms threatened by industrial agriculture. The work has won her several regional and national awards. She recently returned from England where she taught at Harlaxton College for a semester and worked on a project on family farms in Europe.

Adams-Smith has been asked to judge regional and national photo competitions, including the White House News Photographers Association, Photographer of the Year International, and the Society of News Design. She regularly spends several weeks each summer teaching journalism to selected high school students in Kentucky’s Governor’s Scholars Program, and she takes great pleasure in introducing the joys of photography to children in two local programs.

Adams-Smith has been married 19 years to her husband David, and they share the joy of raising their 12-year-old daughter Abigail. Besides her family, her other passion is CrossFit and training for half-marathons and triathlons.