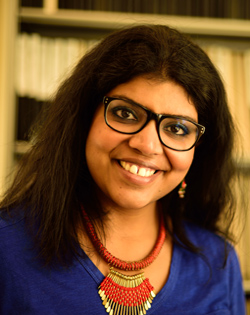 I joined as a faculty at the Western Kentucky University (WKU) in Fall 2017. I teach courses in the Broadcast sequence and I am adapting these courses to the needs of the current convergent media environment. Prior to joining WKU, I was an instructor at Ohio University where I taught in the Journalism and the Women’s and Gender and Sexuality Studies programs.

I have seven years of reporting and producing-experience with some of the biggest media organizations in India. I was a reporter with The Times of India, which is the largest English language daily in the world. I also worked as a senior producer with Radio City 91.1 FM, India’s first private radio station.

My research focuses are freedom of speech, media and journalism in India, health communication, media diversity, and women’s gender and sexuality studies. My dissertation examined how internet and social media censorship practices such as content removal, are employed by the United States and the Indian governments and whether such practices contribute to an online spiral of silence. I would love to hear from you if you are interested in working with me on a research project or an undergraduate research grant.

I am passionate about women’s education and women’s rights. I believe journalism and mass media can play a bigger role in highlighting issues that affect women.

I was born and raised in Kolkata, India. I stay connected to my roots by working with Indian students at WKU, and by rustling up Bengali and Indian delicacies in my kitchen while listening to Bollywood music.