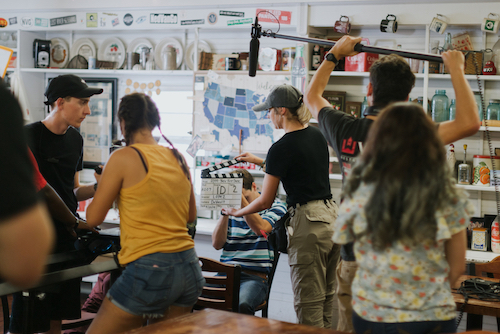 Western Kentucky University will offer Kentucky’s first Bachelor of Fine Arts in Film Production starting in the fall of 2020. The new major is an immersive pre-professional degree for students pursuing a career in the film and television industry.

The new BFA in Film Production’s conservatory-style approach gives students the opportunity to write and direct several of their own films as well as work on 30-40 of their peers’ films in their production courses. Students will be connected with film industry internships, industry-focused study away opportunities, and film union representatives who help students navigate their entry post-graduation into the film and television industry.

Students in the BFA in Film Production program will also be able to take advantage of the WKU School of Media’s recently renovated Jody Richards Hall, which provides an expanded production lab and student workspaces for developing, planning, and presenting their films, as well as a newly created post-production hallway with private editing and finishing suites.

The BFA in Film Production is a competitive, selective-entry major. Twenty-four students per academic year will be selected for admission based on the quality of their creative portfolio, their professionalism in class and on set, and their scholastic work. Students applying for the BFA in Film Production must take 12 hours of Film core curriculum their first year.

WKU’s existing BA in Film remains a flexible, liberal-arts degree giving students a breadth of knowledge through film electives and minor/double major options. The BA in Film is best suited for students who want to double major or continue their studies in graduate school.

"Our students now have a remarkable opportunity to prepare for careers in the film industry using state-of-the-art facilities and studying with award-winning faculty,” said Dr. Lawrence Snyder, Dean of WKU’s Potter College of Arts & Letters. “This program further elevates the School of Media at WKU as a destination of choice for students, and one of the best institutions in the nation, not just the region."

WKU’s School of Media, as part of The John B. Gaines Family Lecture Series, offers an evening looking back at the stories surrounding the December tornadoes and what was involved in sharing those stories with the journalists' communities.