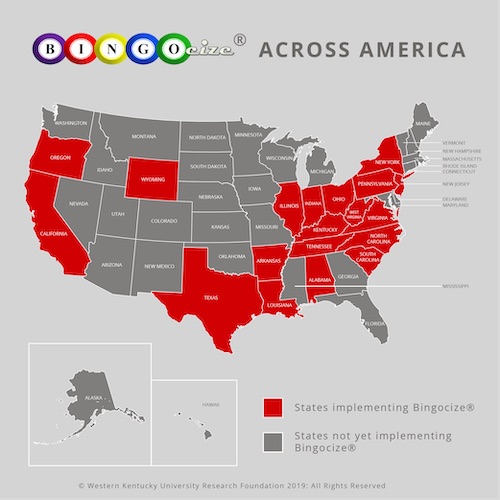 In the spring of 2018, the College of Health in Human Services awarded Dr. Jason Crandall of the School of Kinesiology, Recreation, and Sport the Faculty Award for outstanding contribution in Research/Creativity. In addition to receiving the college award, Dr. Crandall received the 2018-2019 University Award for Research and Creative Activity.

Dr. Crandall received the award in recognition for his research in the field of exercise science and for his creation of a health promotion program for seniors called Bingocize®. This health program, which Dr. Crandall created in 2011, combines bingo, exercise, and health education.

This Bingocize® research helped lead to the opening of the Center for Applied Science in Health and Aging (CASHA). Dr. Crandall was chosen to lead the center as the Director. While the center officially opened in April of 2018, the ribbon cutting ceremony took place on September 11, 2018.

Dr. Crandall received funding from several sources for this project, including grants from the Kentucky Science and Engineering Foundation, the Retirement Research Foundation, and just recently received support from the National Institute on Aging. In total, Bingocize® has received approximately $1.6 million in external funding.

Dr. Crandall describes his interest in this project and its beginnings as “serendipitous.” He identified the need for older adults to exercise and be physically active and wanted to come up with creative ways to encourage these individuals to exercise. “They love Bingo; they always have; they always will,” said Dr. Crandall. He explained that the target audience of Bingocize® is not the older adult who is already exercising, instead it is the person who is sedentary, likes Bingo, and may slowly advance to other types of more intense exercises after participating in the program.

Bingocize® has had a wide impact since its creation. The United States Administration of Community Living approved the program, allowing senior centers to use grant money to purchase a license for the program. So far, Bingocize® has expanded to 10 states and even beyond the United States. Researchers recently finished a trial of the program in England and another will soon start in Poland. Researchers in the Philippines and Finland also have plans to test the program. Dr. Crandall said his goal is clear, “Disseminate Bingocize® as far and wide as possible.”

While the primary target group for Bingocize® is older individuals, Dr. Crandall explained that he and other researchers have seen success when the program was tested in other age groups. The program worked to help reduce college students’ stress, while a University of Kentucky Masters student used the program to encourage physical activity during indoor recess for third graders. Despite the lack of their normal outdoor activity, the children responded positively to the program. So far, it seems the program can successfully increase physical activity in whatever capacity it’s used.

The program has been successful despite the difficulties of conducting the research and collecting the data. Dr. Crandall explained that he and his colleagues often travel to small rural areas to collect data. “It’s a logistics nightmare,” he said. Transporting the research team to these rural areas is time consuming and expensive. Overnight stays are often required because of the distance. In addition to extensive travel, Dr. Crandall explained that scheduling testing sessions at the various senior centers can be difficult due to conflicting schedules.

While the faculty position brought Dr. Crandall to WKU, this was not his first time on campus. As an undergraduate, Dr. Crandall played baseball here on the Hill. Starting as a business major, his interest in exercise science did not form until he returned to finish his undergraduate degree. After deciding to pursue a PhD to become a professor, the decision to come back to WKU was clear. According to Dr. Crandall, he always wanted to come back. “WKU was the kind of school where I wanted to be,” he said.

Dr. Crandall’s own experience working with a professor mentor on a senior research project made quite the impact; this largely inspired his dedication to student research. All of his research includes students. “It always has, it always will,” he said. In fact, the grant funding he and his colleagues (Drs. Shake and Neils-Strunjas) have received allows seven graduate students to work on their projects plus there are almost 20 undergraduate students helping with their National Institutes of Health clinical trial.

With the help of student data, WKU researchers aim to improve learning

Even as the events of the 2016 presidential election unfold, WKU’s Dr. Timothy Rich, Assistant Professor of Political Science, continues to turn his attention internationally, studying the processes of politics beyond our border.

A WKU biology faculty member has received a National Science Foundation research grant to study how arctic songbirds have adapted to diminished sleep patterns and how that might help in the understanding of sleep loss in humans.