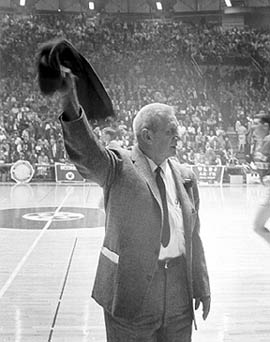 WKU Coach E.A. Diddle had a gift for spotting unpolished talent and molding them into outstanding athletes who often exceeded expectations. No one experienced this more than his student athletes.

The community is invited to explore the life and legacy of Coach Diddle through the Society for Lifelong Learning September Food for Thought event on Wednesday, September 18.

“For many, he's only a name on a building,” said West, “but Coach Diddle was one of the most well-known coaches in all of college basketball. His influence made a lasting impact on not only WKU, but on the entire sport of basketball.”

Over 50 years after his death, Coach E.A. Diddle remains one of the most successful coaches in the history of college sports. Upon his retirement in 1964, Diddle had coached 1,062 Hilltopper basketball games and had more wins than any other coach in NCAA history . . . and he still ranks among the top 16 today.

Diddle was an early proponent of the fast-break, a style of play that contributed to his tremendous success and was quickly adopted by teams throughout the country.

He was also a showman and had an unorthodox approach.

According to WKU archives, he once stated, "We play the fast break because it makes people come to our gymnasium. They like to see scoring. We give them what they like. I see it as entertainment.”

His teams entertained fans by dunking the ball, which was not widely accepted by straight-laced coaches at the time. His use of a red towel during games established a long-standing WKU tradition that today is the ultimate representation of Hilltopper spirit.

Food for Thought: “The Coach Diddle Story . . . From Those Who Knew Him Then” will take place

To register and learn more about Gary West and the panel of former athletes, visit wku.edu/sll/fft/coachdiddle.php.

The Society for Lifelong Learning (SLL) at WKU is a member-driven organization that offers a wide range of high quality, intellectually stimulating, non-credit educational programs and experiences for those 50 and over.