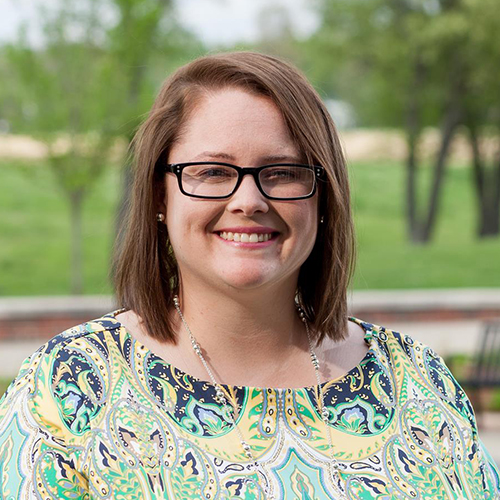 A WKU employee was awarded the WKU Young Alumna of the Year award during the 2018 WKU Alumni Summit Awards. WKU Owensboro Campus Evening Manager Jessica Boling received the honor for her work with the Owensboro Alumni Chapter.

The 2018 Summit Awards ceremony was held on Friday, April 20 at the Augenstein Alumni Center. The annual event is an opportunity to honor those who give their time and resources to WKU, including alumni chapters and volunteers that stand out for their service. Nominations for the annual award are submitted by WKU alumni members throughout the state. The winner of the prestigious award is selected by alumni members.

“Jessica is an active, passionate member of our alumni chapter,” said Summit Awards Planning Committee member Dave Roberts who accepted the award on Boling’s behalf. Roberts is a member and former president of the Owensboro Alumni Chapter who has worked with Jessica since she joined the chapter following her graduation in 2016.

“She has contributed great ideas, volunteered a significant amount of her time and helped with social media efforts. She was also instrumental in raising funds for the Owensboro Chapter scholarship which is now over $30,000,” said Roberts.

The Owensboro Chapter raised funds for their scholarship by selling prints of Big Red painted by local speed artist Aaron Kizer. Boling sold prints at WKU graduations in Bowling Green and Owensboro and helped ship prints to people who ordered them online. She said they have been shipped to people all over the country.

“I even sold one to Ralph Carey’s brother.” Carey is a WKU alumnus who created the beloved mascot in 1979. Boling transferred to WKU in fall 2009 and eventually became a student worker. She has been employed at WKU since, initially working as a part-time staff member and accepting a full-time position in 2017.

“I like giving back to the community. I also enjoy meeting people and hearing their stories. That’s my favorite part – getting to talk with other alumni and learning about what WKU means to them.” Always thinking about her alumni chapter, Boling added that Kizer’s prints are still available. “I’m happy to sell more prints for the scholarship fund,” she added. To order, you can email Jessica at Jessica.boling@wku.edu. Information about the WKU Owensboro Alumni Chapter is available on their website.