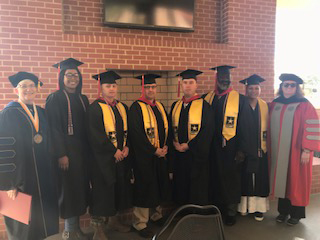 Bowling Green, Kentucky – Graduates from 27 colleges and universities were honored at the 4th Annual Fort Knox College Graduation Ceremony on Thursday. Six of those recognized were WKU graduates.

WKU Provost Cheryl Stevens spoke during the ceremony, congratulating WKU graduates and ending her speech with “Go Tops!” which resulted a resounding cheer.  Western Kentucky University, along with Central Texas College, Elizabethtown Community & Technical College, Sullivan University and University of Louisville, is represented on base at Fort Knox and serves soldiers and families with quality educational programs and student support to ensure their success.

For more information about WKU in Elizabethtown-Fort Knox, visit wku.edu/regionalcampuses/etown-ftknox.