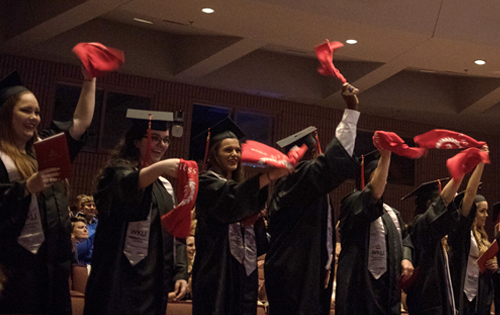 Elizabethtown, KY – WKU honored the Spring Graduating Class of 2019 at Graduand, a pre-commencement ceremony for students who have completed at least one-fourth of their degree at WKU in Elizabethtown-Fort Knox. Thirty-seven students attended the ceremony on May 1 at the Hardin County Schools Performing Arts Center (SCSPAC) in Elizabethtown. There were 149 WKU graduates eligible to participate.

Graduand Loretta Sonsall was selected to represent the Class of 2019 and provided student remarks. She addressed her fellow graduands, stating that “I stand before you today not as a fifty-year-old woman, mother-of-three, military spouse, but as a peer,” said Tonsall. “ . . . today, we celebrate what we have learned, what we have experienced, what we have achieved and what we have earned - as we should.”

Sonsall acknowledged the hard work and dedication necessary to earn a degree. She then recognized the WKU staff and professors from her in-person and online classes for their encouragement and support and thanked her husband and children who made numerous sacrifices to help her achieve her goal.

Sonsall also addressed her fellow WKU graduands with a message about learning for a lifetime.

“After today, some of you will go onto new jobs. Some of you will remain with your current jobs (with hopefully - a promotion), and some of you may apply to even higher learning such as graduate school or law school,” she said.

“Wherever you go from here, I encourage you to continue to learn. Let every day be your classroom. Use what you learned during your years here at WKU to enhance your life and to encourage others, like your children, your sister – or even your grandmother. We are never too old to learn.”

Sonsall concluded by saying, “Keep learning. But tonight, celebrate! Congratulations to our WKU 2019 spring graduates. We have earned it!”

Dr. Donielle Lovell, director of regional programming, announced the graduands, and Laves presented each of them with a silver stole representing WKU in Elizabethtown-Fort Knox which they can wear at commencement.

Before the recessional, Laves provided closing remarks, congratulated the graduands and invited everyone to a reception immediately following.

WKU’s Spring 2019 Commencement Ceremony will take place in Bowling Green on Friday, May 10 with President Timothy Caboni presenting graduates to the Board of Regents for the conferral of degrees.