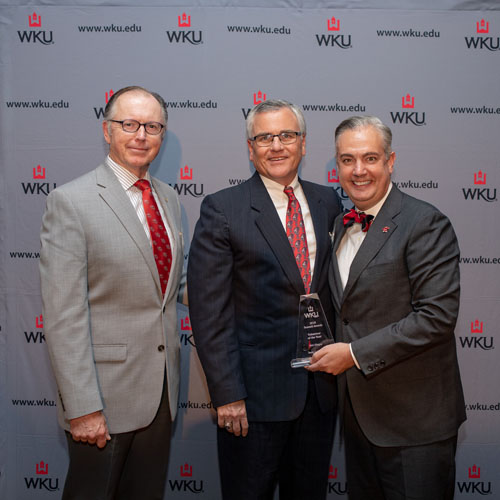 Dr. Benny Lile was presented with the 2018 Volunteer of the Year award on behalf of WKU in Glasgow last night (Oct. 25) at the 18th Annual WKU Summit Awards.

Dr. Lile is a 2012 graduate of the Doctorate of Education program at WKU. He is the current Superintendent of Metcalfe County Schools where he has been a part of the team that expanded dual credit and work study programs; opened a student-run restaurant; and established a band made up of teachers, administrators, students and Metcalfe County Schools alumni.

“Dr. Lile was an excellent choice for this award due to his continuous promotion of WKU to Metcalfe County students and his tireless support of the WKU Glasgow Hilltopper Institute,” said Dr. Beth Laves, Associate Vice President, Extended Learning & Outreach.

“He has been an advocate of WKU in Glasgow for many years, and we appreciate his outstanding support.”