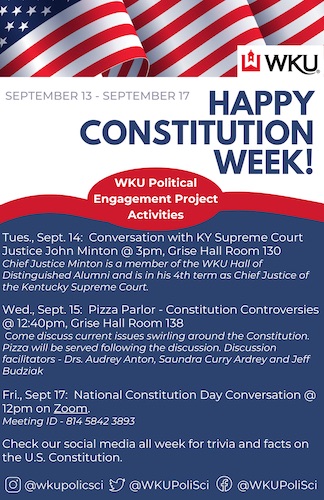 On-campus activities begin with a Conversation with Kentucky Supreme Court Chief Justice John Minton. A resident of Bowling Green, Chief Justice Minton is serving his fourth term as Chief Justice and is a member of the WKU Hall of Distinguished Alumni. The event will take place on Tuesday, September 14th at 3:00 pm in Grise Hall 130.

On Wednesday, students are invited to join the discussion on constitutional controversies at the “Pizza Parlor”.  Professors Audrey Anton, Saundra Curry Ardrey, and Jeff Budziak will facilitate discussions on current constitutional issues facing the Supreme Court. Pizza will be served following the discussion. The discussion will take place at 12:40 pm in Grise Hall 138.

The week will wrap up on Friday when members of the WKU community are invited to join the National Constitution Day Conversation via Zoom. The conversation begins at Noon and can be accessed through the link below.

Throughout the week look for trivia and fun facts related to the Constitution that will be posted on Department of Political Science social media.