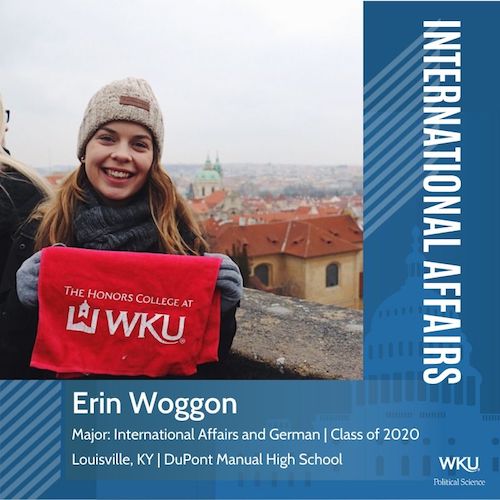 Erin Woggon is a senior International Affairs and German double major from Dupont Manual High School in Louisville. She is involved in Honors Toppers, German Club, and Delta Zeta.

Erin recently defended, passing with distinction, her Honors thesis, "Recruiting Women to Politics: Insights from German Politicians". The thesis is based on research conducted through a Faculty-Undergraduate Student Engagement (FUSE) research grant. She presented her research at a number of conferences including at the annual meetings of the Southern Political Science Association and International Studies Association (ISA) Midwest.

Majoring in International Affairs at WKU has allowed Erin to learn about complex ideas and issues facing different regions around the world. This allows her to identify patterns and consistencies between regions.

Erin has made the most of her time at WKU by studying abroad several times. She studied abroad twice in Germany and was able to conduct research related to her Honors thesis while there. “My time in Germany was incredibly immersive and personally rewarding through my German language development in addition to networking." She is spending this semester in Thailand funded by various study abroad scholarships.