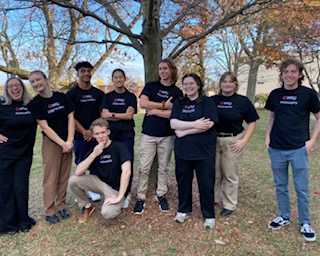 Though they appear patient, they wait anxiously for the steel door behind them to close, so that the imposing electrified gate before them may open. They contain their excitement as they pass the barbed wire, enter the compound, and show the mysterious control officer behind the one-way mirror the blacklight stamp they received for passing the gauntlet of security…all so that they may be admitted to their classroom. Once inside, all pretense is gone. The “outside” students (undergraduates enrolled at WKU) in Dr. Anton’s Stoicism class joyfully arrange the chairs for the activities they know they will get to do with their “inside” counterparts (incarcerated members of the class) upon their arrival. The incarcerated men are led into the room by an escort, and all students (both inside and out) fail miserably to hide the glee advertised across their faces as they are reunited with their classmates and the class becomes, once again, complete. Finally, class may begin.

For many students, class began days ago in their minds when they made a list of their Stoic attempts at living well, curating which updates they would share with the class during “check-in.” Everyone listens at the edge of their seats as we take turns sharing how Stoic Week has gone so far. The class had been preparing to participate in the now decade-long international challenge of living like a Stoic for one week. Everyone is excited to hear how incarcerated students managed Monday’s theme of control, knowing full well how little they already had in their lives even prior to Stoic Week. Outside students proudly share how they followed the advice and examples discussed in Joe’s podcast episode, How Not To Become A Victim Of Dehumanization, to avoid letting insults affect them. Everyone reflects on what the social and psychological experiment of Stoic Week means to them:

“Stoic Week means living life well despite our circumstances. Our virtue (character) can aid us in our many endeavors.”

“Stoic week means that I was living to better myself, not for others or for a program, but for myself, learning how to use the four virtues and negative visualization in my every day walk and having to stop stressing over what I can’t control and stop caring about what other think about me and what they say about me.”

But Stoic Week is not the only experience these students share. Every Inside-Out class is steeped in meaning, connection, and experiential learning. As one WKU student put it:

Through their study together, lessons learned through traditional class content are amplified:

“Prison class is an opportunity to recapture the dignity, humanity, and individuality that incarceration strips away. Through academic discourse and exchange of ideas we are able to feel like our voice matters.”

Students learn not only the content of the course, but also how to value themselves:

“Prison class means everything to me because it helps me to realize that I’m more than my crimes. Without that insight I know that I wouldn’t be able to see myself doing and being a better human being. It’s almost as important as air because, to me, it gives life in a place that is void of it.”

Though certainly not a requirement, several WKU students also study criminology and related disciplines, and prison class is particularly valuable to them, given their career aspirations. One such student explains:

“Prison class is something I will carry with me into my career. It is important for people involved in the criminal justice system to work with and understand offenders. This class has broadened my views and will hopefully make me better at my job.”

Nevertheless, prison class is for everyone, no matter their major or course of study. People attend college to learn more than just a career; college should help students decide and make progress towards becoming the person they want to be:

“This class has given me a new perspective on prison as well as life. I think this is one of the most important things I have done in my life [so far]. Simply by being in the class we are helping to reduce recidivism and giving people who have very little something to look forward to. This class has relit my fire for learning…”

Here, Dalton refers to the well-documented statistics indicating that taking a single college-level course while incarcerated reduces an individual’s risk of recidivism (being rearrested for any crime once released) by 43%. By taking the prison class, Dalton was not only reacquainting himself with his love of learning, he was also playing his part in making the world a better place.

“Prison class has really given me a new perspective on everything. Often times incarcerated people get dehumanized and treated like “less than.” Sharing this class with them has really shown me that they are just as human as the rest of us (if not better humans).”

While we never ask inside students about their crimes (since it’s equally rude to ask WKU students, “What’s the worst thing you’ve ever done?”), incarcerated students are permitted to speak of them when it is relevant to the class discussion. As many of Dr. Anton’s classes touch on issues in Ethics, incarcerated students frequently relate their experiences to the course material—in particular insofar as it concerns behaving differently in the future. As one incarcerated student put it:

“Class in prison can help change people’s lives. This is one of the best times of the week. This class is needed not only to help us as people but as men who made mistakes.” He adds, “This has made me rethink [not only] how I live my life, but [also] how I’ll act moving forward. Thank you.”

Indeed, the Inside-Out philosophy classes offered by the department of Political Science change lives and people from both sides:

“Prison class has pushed stigmas and biases I had previously about the prison system and the people inside. Each of the “inside guys” has taught me how to be a better person and I am truly grateful for the experience.”

Dr. Anton says that she feels she has done her job well when students can forget, even for a moment, where they are:

“Class in prison…we feel free for the few hours we are in class. It is to us that we are part of the world and not throwaway people; we are just part of the class and not in prison.”

While the prison environment and the unique experience of the class members are part of the learning content, it is through teaching each other—not through studying one another—that students in these classes learn and grow. While the interaction is temporary, and the connections have an expiration date, the impact students have on one another is lifelong:

“I have no way to express how wonderful it was to be a part of your Stoic Family,” says one incarcerated member of the class. “I enjoyed all of the interaction and sharing with this group. I will always remember.”

There are limited spots available in Dr. Anton’s spring Inside-Out class, PHIL 323: Social Ethics, which meets weekly on Thursdays (students must be available from 3:30-9:30pm every Thursday to participate). For more information, contact Dr. Anton directly at audrey.anton@wku.edu.