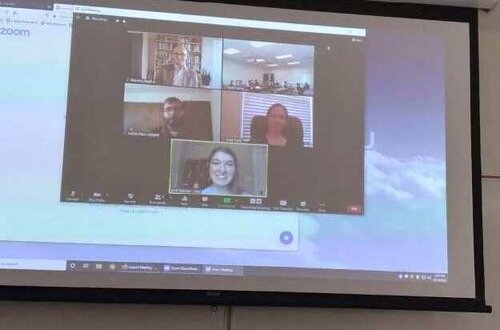 On October 19, 2021, the WKU Department of Modern Languages collaborated with the WKU Department of Political Science as alumni of both departments shared the power and prospects of pairing international affairs (IA) and language study in the professional world. All Hilltoppers, whether they are currently enrolled in international affairs, language, or are considering specializing in these areas, were welcome to attend the meeting.

Four panelists joined the meeting via Zoom and shared information and advice concerning their personal experiences on the Hill, in addition to how their specializations have made them competitive in the professional world. Noah A. Stevens, a graduate in IA, Arabic, and a former team member of the WKU QatarDebate Team, shared on the importance of internships during the undergraduate career. Originally, Noah viewed himself solely as a future diplomat and worked wholeheartedly towards this goal during his first years as an undergraduate. Later, however, his professional ambitions changed when he completed an internship in Washington D.C. and realized how much he loved serving his country domestically. As a professional in Washington D.C., Stevens explains that Arabic is another “tool in his tool belt” and is a valid manner of expressing dedication in an interview.

Other panelists, including Andi Dahmer (IA and Spanish) and Lucas Knight (IA and Chinese) talked about how language is present in their professional and academic lives and shared valuable information for students interested in various careers. Dahmer, for example, stated that she uses

Spanish professionally through translation and interpretation, whereas Knight recalled that Chinese was what elevated his graduate school application forms to the next level. Kelly Tursic, a graduate of the WKU Chinese Flagship Program who majored in IA, Spanish, and Asian Religions and Cultures, stated that she was able to use her language skills as another asset during her interview in federal civil service.

All students explained how indispensable a language is when paired with a specialization. Students interested in pairing a language with their current major of study and have questions about major, minor, or certificate programs should contact modern.languages@wku.edu for more information.

Raechel Anne Jolie, author of the critically-acclaimed memoir Rust Belt Femme, will give a public lecture and lead a Creative Writing MFA seminar on Wednesday, February 15.