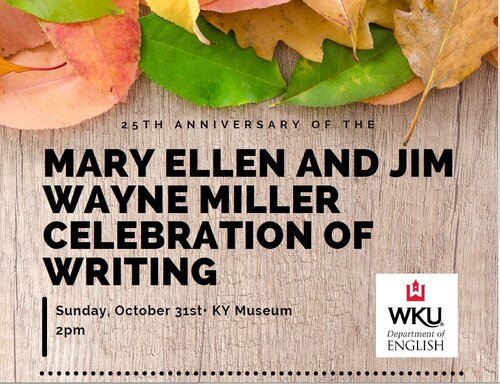 The WKU English Department will host the 25th Annual Mary Ellen and Jim Wayne Miller Celebration of Writing on October 31, 2021. The event will take place at 2 pm in the Kentucky Museum, which is located on campus at 1444 Kentucky Street. This year’s celebration is special because it is the event’s 25th Anniversary.

Dr. Ted Hovet of the WKU English Department reflected on the legacy of Mary Ellen and Jim Wayne Miller saying, “Professor Mary Ellen Miller began the Jim Wayne Miller Celebration of Writing in 1997, after Jim Wayne Miller’s death in 1996, as a way to honor his career as a renowned author, poet, and professor.” According to Miller’s biography on JimWayneMiller.net, Miller joined the WKU family in 1963 when he took a position as a German language professor. He published numerous books of poetry, fiction, essays, and short stories during his career. Miller was named the Kentucky Poet Laureate in 1986 and inducted into the Kentucky Writer’s Hall of Fame in 2015. He remained at WKU until his death from lung cancer in 1996.

Dr. Hovet explained the Jim Wayne Miller Celebration of Writing evolved into the Mary Ellen and Jim Wayne Miller Celebration of Writing after Mary Ellen Miller’s death. “In 2018, Mary Ellen Miller passed away, and, to honor her legacy, the department renamed the event […] and established an endowment fund to support it.” Dr. Tom Hunley also remembered Mary Ellen Miller fondly. “I think I speak for the entire English faculty when I say that we dearly miss our colleague,” remarked Dr. Hunley. “[She] faithfully organized this event for many years. We suit up and show up in her honor, as well as her husband’s.”

WKU English Department Head Dr. Alison Langdon commented on the event’s longevity saying, “It’s hard to believe we’ve been holding this event for a quarter of a century! Its longevity is a testament to Mary Ellen’s legacy and to all those who have generously provided support over the years to highlight the fantastic writers we have in the Commonwealth.” Dr. Hovet elaborated on Mary Ellen Miller’s contributions to WKU adding, “The 2018 event (when Mary Ellen’s name was added to the celebration’s title) celebrated Mary Ellen Miller’s life and featured readings of her work, poetry about her, and tributes to her influence as a writer and a teacher. During her 53 years of teaching at WKU, Mary Ellen Miller made many contributions to the university, including becoming WKU’s first poet laureate in 2017.”

For Mary Ellen Miller, it was imperative the Jim Wayne Miller Celebration of Writing feature a contest for student writers. According to Dr. Hovet, “Mary Ellen Miller was emphatic on the inclusion of a contest and workshop to encourage students to write.” This year’s celebration will be no exception. It will feature a creative non-fiction writing contest open to undergraduate English majors, English minors, and students currently enrolled in a Creative Writing class.

Writing submissions must 750 words or fewer. Each student may submit one creative non-fiction piece. Submissions are due by Friday, October 8, 2021 and must include a cover letter containing the author’s name, the title of their piece, the author’s address, phone number, WKU 800 number and email address. Monetary prizes will be awarded for the top three finalists. The fist place winner will receive $100; the second place winner will receive $50; and the third place winner will receive $25. In addition, all ten finalists will be recognized during the celebration event and invited to attend a workshop hosted by guest speaker and writing contest judge Amy Wright at 10 am on Sunday, October 31.

Entries can be submitted here: http://tinyurl.com/JWMEM2021

Amy Wright is a creative non-fiction author, poet, and English professor at Austen Peay State University in Tennessee. Dr. Hunley describes her as, “the author of several poetry collections including Cracker Sonnets. Amy has recently had some major success with a work of creative non-fiction entitled Paper Concert (Sarabande, 2021).” Wright will serve as the latest in a long line of Mary Ellen and Jim Wayne Miller Celebration of Writing guest speakers. Dr. Hunley expanded on the history of the celebration’s guest speakers saying, “We’ve had some big-name authors such as Wendell Berry, Silas House, and Rosanna Warren, but the ones who stood out most for me, personally, were Spalding Professor Katy Yocom, former UK Homecoming Queen Vivian Shipley, and WKU’s own Frank and Peggy Steele, who co-featured one year.”

The impact Mary Ellen and Jim Wayne Miller had on Western Kentucky University is undeniable. With 86 combined years of teaching at WKU, the Millers have been on the Hill almost as long as WKU itself (115 years). The Mary Ellen and Jim Wayne Miller Celebration of Writing will ensure that the Millers, who gave so much to WKU, continue to be honored for their contributions.