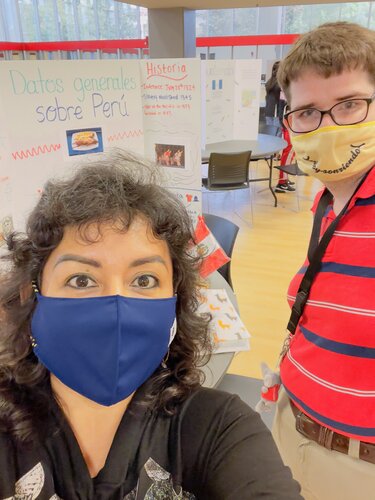 On Wednesday, September 15th from 5:30-7:30 the Western Kentucky University Hilltopper Organization for Latin American Students (HOLAS) hosted an event entitled “All Around the World” to kick off Hispanic Heritage Month. The WKU Spanish Club, Korean Pop Culture Club, and Intercultural Student Engagement Center partnered with the HOLAS to make this event a great success.

The event was hosted in the Preston Center and gave WKU students from all backgrounds an opportunity to take a metaphorical trip around the world. “All Around the World” aimed to educate attendees on the unique cultures across Latin America, while also creating a fun environment for students and celebrating Hispanic Heritage Month.

At the event, there was art, music, dancing, games, and more from various countries in Latin America. They also had Latin American foods and desserts, including tacos, tamales, and arroz con leche. Additionally, they held a raffle, where the Spanish club provided two $25 Amazon gift cards and Department of Modern Languages mugs.

In addition to being fun, the event was also informational. The HOLAS created many informational displays about Latin American countries, such as Mexico, Guatemala, El Salvador, the Dominican Republic, and others. They also had a screen at the front of the room displaying influential Hispanic individuals, such as Alexandria Ocasio-Cortez (AOC), Sonia Sotomayor, and Shakira.