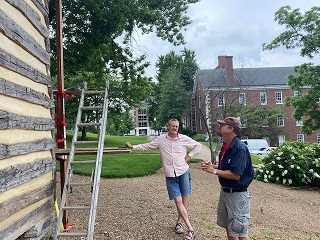 The Kentucky Museum has finished restoration work on the 1810 Felts House, a historic log cabin originally from Logan County that now resides on WKU’s campus. The restoration was supported by a grant from the E. Rhodes and Leona B. Carpenter Foundation and a gift from WKU alum Allen Shipp (Class of 1980).

Andy Mills of the American Antique Company completed restoration work over the last four months, as one of his final projects before retirement. Mills built new period-appropriate doors and sill beams using reclaimed materials, installed copper flashing to protect from leaks, and re-chinked the exterior logs using a period appropriate materials that prevent moisture from seeping into the cabin. These restorations and modifications will help to preserve the cabin’s structure and have restored its appearance closer to what it may have originally looked like, recognizing that as the Felts family grew in size, so did the cabin. Mills’ work also helped find out more about how the house was built and modified over its lifetime, identifying future areas for study and conservation.

“That person who built that structure came here with just a broad axe, a double bid axe, and an adze and made a house, and we are still using these houses 200 years later,” stated Mills in an interview with Ginny Willoughby. “I think people just love the simplicity of these homes and what they represent on a personal level, I know I do.”

“The Felts House restoration project this past three months has been both a great boon to the further physical preservation of WKU’s iconic Felt House but also provided the stage for student research initiatives” said Kentucky Museum Director Brent Bjorkman “The Kentucky Museum remains dedicated to providing students with hands-on experience as part of our work to share Kentucky’s history and culture with the greater community and we thanks the Carpenter Foundation for their ongoing support.”

An exhibition on the Felts family and log house is set to open this fall in the Kentucky Museum, as part of their new Teaching Gallery. Featuring Willoughby and Hagan’s research, the exhibit will provide an overview of the Felts Log Cabin’s life in Logan County and at WKU, as well as recent findings on pioneer family life.

Constructed in 1810, the Felts House was the Logan County home of Archibald Felts, a Revolutionary War veteran who was part of the first generation of permanent settlers in Kentucky. The cabin was the two-story, four-room home of the Felts family for 150 years, remaining among Archibald’s direct descendants. In 1968, Archibald’s great-granddaughter, Ollie Felts, sold the cabin and Felts farm. Recognizing the historic integrity and value of the cabin, the new owner offered the cabin to Western Kentucky University—which accepted and moved the cabin to campus to be used by the Kentucky Museum.

Today, the Museum uses the Felts House as a living history classroom, where visitors and school groups can see and interact with daily life in the early 19th century. Artifacts inside the house are replicas of those used in rural Kentucky, allowing hands-on presentations and direct engagement with local history.

The Kentucky Museum is open to the public Tuesday through Saturday, 9 a.m. to 4 p.m. To view current exhibits and programs, and find out more about visiting the museum, call (270) 745-2592 or visit https://www.wku.edu/kentuckymuseum/

Now in our 80th year, the Kentucky Museum celebrates all aspects of South-Central Kentucky’s art, history, and culture. “Kentuckians need to know Kentucky” was the museum’s earliest conceptual framework, which took shape in the eyes of WKU’s founding president Henry Hardin Cherry. Today, we are a steadfast educational campus partner helping to inspire innovation, elevate community, and transform the lives of our students and the community.