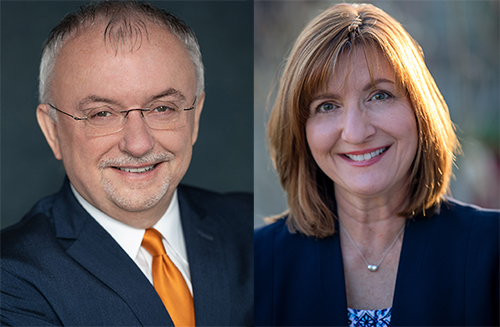 Michael Collins, a White House correspondent for USA Today, and Monica Dias, senior counsel for content and intellectual property at The E.W. Scripps Co. and former reporter for The Cincinnati Post/The Kentucky Post, are among 10 journalists in the 41st hall of fame class. The induction ceremony will begin at 5 p.m. ET.

Collins has been a Washington-based reporter for 20 years, first with Scripps Howard News Service, where he covered Congress and other issues for Scripps' papers in Ohio, Kentucky, California and Tennessee. He has been with USA Today for five years and, in addition to covering the White House and Congress, has written extensively about trade, tariffs and the federal budget. Before arriving in the nation’s capital, Collins was a reporter for The Cincinnati Post and its sister paper, The Kentucky Post in Covington. He spent five years in Frankfort as The Kentucky Post’s state capital bureau chief, where he covered the governor and the legislature. He also served as night city editor and editorial writer.

Dias, a Paducah native who lives in Covington, earned a bachelor’s degree in journalism and government at WKU. She served as managing editor of the College Heights Herald in spring 1984 after several years as a Herald reporter.

As senior counsel for content and intellectual property at The E.W. Scripps Company in Cincinnati, she advises the company’s 61 TV stations and national brands, including Court TV and Newsy, with regard to shaping news scripts, developing newsgathering strategies, pushing for access to public records, defending copyright infringement claims, and protecting the company’s trademarks and copyrights. A seasoned and nationally known First Amendment and intellectual property attorney, Dias was a litigator at Frost Brown Todd for nearly 18 years before joining Scripps. She is a former legal fellow for the Reporters Committee for Freedom of the Press in Washington, D.C. In 2019, she delivered the State of the First Amendment address at the University of Kentucky School of Journalism and Media. Before becoming a lawyer, Dias was a reporter for 17 years at The Kentucky Post/The Cincinnati Post newspapers, where she wrote investigative news stories about environmental and transportation issues.