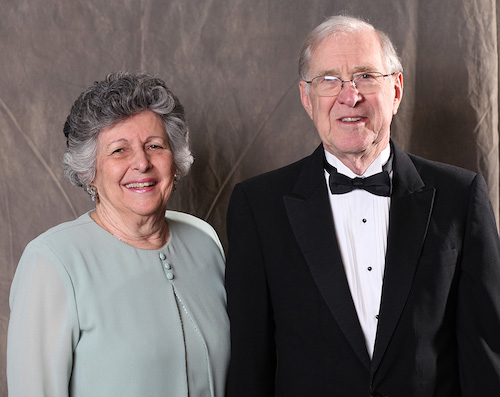 Now, his dedication to the region will be permanently memorialized, as the Kentucky Building will be renamed the Charles Hardcastle Kentucky Building in honor of a $1.5 million gift made by the namesake and his wife. The naming was approved by the Western Kentucky University Board of Regents on Friday morning (March 5).

“WKU is incredibly grateful for the philanthropic support Charles and Carolyn provide, demonstrating their strong connection to and belief in our institution,” said WKU President Timothy C. Caboni. “Their personal contribution will touch the lives of many Hilltoppers for years to come.”

The Charles Hardcastle Endowed Fund for Excellence will provide annual support for the Kentucky Building facility and related University programming, including the Kentucky Museum, the Kentucky Library Research Collections, the Department of Library Special Collections and the Kentucky Folklife Program.

“History is important, and it has a way of repeating itself,” said Charles Hardcastle. “It is essential to remember our history and keep things that tell those stories. The Kentucky Museum is a resource for the city of Bowling Green and the community, and I wanted to make sure it was always accessible.”

“The Charles Hardcastle Endowed Fund for Excellence will allow us to continue our innovative work sharing culture, history and art through public programming and continue our preservation efforts to further safeguard our collections,” said Brent Bjorkman, Director of the Kentucky Museum. “Our students, our innovative faculty partners, the south-central Kentucky community and visitors from far and wide will benefit from this thoughtful gift.”

In addition to maintaining and enhancing the vitality of the Kentucky Building, the Charles Hardcastle Endowed Fund for Excellence can also be used to create positions and internships for WKU students or to support student-produced exhibitions.

Hardcastle said that he was inspired to make this gift to his alma mater to “pay it forward.”

“The youth are the future of the world, and we need to make sure they are taken care of,” he said. “I didn’t get a scholarship when I came to Western, but my tuition was only $35. This is a way for me to pay it forward for others.”

“The Kentucky Museum is incredibly thankful to the Hardcastles for their generosity,” said Bjorkman. “This special gift is steeped in the Hardcastles’ lifelong passion to further and secure the education efforts we in the Museum work to foster on a daily basis."

In addition to his desire to protect and promote history, Charles Hardcastle said he decided to make this gift because, “you want to be remembered.” Through the couple’s generosity, they have ensured that his legacy will remain at WKU.

Longtime supporters of the University and the community, the Hardcastles are members of the Henry Hardin Cherry Society and the President’s Circle at WKU. They are also members of the Cupola Society, where they have been recognized for 48 years of consecutive giving to WKU, and have been a part of many local civic organizations. Lifetime Members of the WKU Alumni Association, the couple has also served on multiple boards and committees at the University, providing leadership on strategic initiatives.