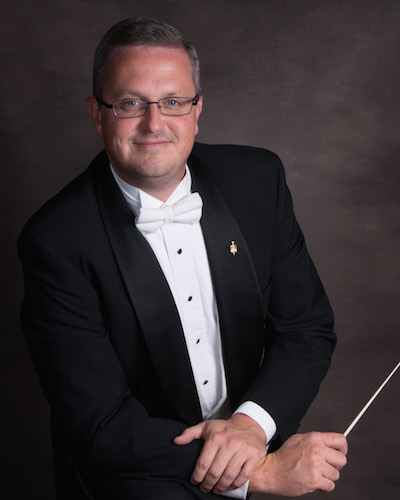 Dr. Matthew McCurry has been appointed as the new Associate Director of Bands and Director of the Big Red Marching Band at WKU.

Dr. McCurry’s primary responsibilities at WKU will include directing the Big Red Marching Band, directing the Pep Band at men’s basketball games, supervising Pep Bands for other WKU Athletics events, conducting the Symphonic Band during the spring semester and teaching Music Education courses in the Department of Music.

“From the moment I stepped on the campus of WKU, I felt the warm and welcoming atmosphere from students, faculty, and administration alike,” Dr. McCurry said.  “I am very excited to have the opportunity to work with this group of talented and dedicated students and a team of exceptional faculty that continue to help them reach their greatest potential. It is clear that there is outstanding teaching and music making happening at WKU and I look forward to continuing this tradition of excellence.”

Dr. McCurry was selected after a national search conducted by WKU’s Department of Music, said Dr. Gary Schallert, Director of Bands and Professor of Music. “Dr. McCurry’s experience as a public school band director in Knoxville, Tennessee, and his recent work on the faculty at West Virginia University will be a tremendous asset to the band program and the Department of Music at WKU,” he said.

Since 2016, Dr. McCurry has served as Assistant Director of Bands at West Virginia University where his responsibilities included teaching classes in undergraduate conducting, conducting the University Concert Bands, as well as other concert ensembles and athletic bands, including the Mountaineer Marching Band, The Pride of West Virginia, and the Mountaineer Pep Bands.

Dr. McCurry received a bachelor’s degree in Instrumental and Vocal Music Education from Carson-Newman University, where he also earned a master’s degree in Education. He received the Doctor of Musical Arts degree in Conducting from West Virginia University.

Dr. McCurry also spent 15 years as an educator in the public schools of East Tennessee, most recently as the Director of Bands at Knoxville’s Carter High School.  During his time there, the band grew to become the largest comprehensive band program in the county with over 200 students in two marching bands, three concert ensembles, and competitive jazz and indoor programs. Additionally, Dr. McCurry often appears as a guest clinician for local and regional honor bands and summer clinics.