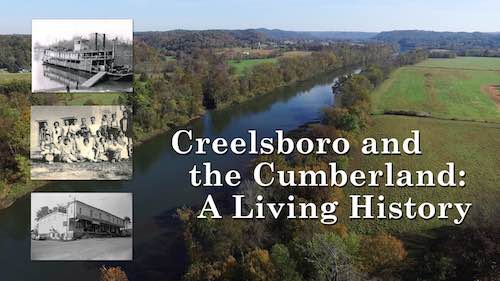 Creelsboro and the Cumberland: A Living History is a compelling documentary that examines the history and culture of a farming community along the Cumberland River in south-central Kentucky. A campus screening of the new film will be presented in Cherry Hall 125 on Monday, February 24, 2020 at 7:00 pm.

Creelsboro and the Cumberland follows Janie-Rice Brother, principal scholar and architectural historian, as she integrates archival research and architectural surveys with oral histories and family photographs to weave the story of the Creelsboro valley. Interviews with researchers and residents bring the valley’s rich cultural heritage to life, from the first American Indians to occupy the area, through early settlement by Euro-American pioneers, to the golden age of steamboats and river travel, and to the changes brought by the construction of Wolf Creek Dam.

One important source of content for the film is the extensive Russell County research of folklorist Dr. Lynwood Montell and his students, curated at the WKU Manuscripts and Folklife Archives. The documentary also presents beautiful aerial video, rare archival photographs, original artworks, and an original soundtrack for a moving look at the valley’s history and the community’s intimate connection to the Cumberland River.

Following the screening, a panel will lead a discussion with the audience. In addition to Janie-Rice Brother, panelists include Drs. Lynwood Montell (retired) and Ashley Stinnett of the Department of Folk Studies and Anthropology, Drs. David Pollack and Gwynn Henderson of the Kentucky Archaeological Survey (KAS), and Mr. John (Brack) Flanagan, Creelsboro resident and amateur historian.

Creelsboro and the Cumberland: A Living History is the seventh episode in The Kentucky Archaeology & Heritage Series, which is produced by Voyageur Media Group, Inc. for the Kentucky Archaeological Survey at WKU. It is being distributed to viewers, teachers, and students via regional public television stations, home DVDs, and streaming video.

In addition to the documentary, the integrated Creelsboro project includes a companion website, educational resources, and a digital media archive. Funding for the project was provided by the Kentucky Transportation Cabinet, Federal Highway Administration, Kentucky Archaeological Survey, and Voyageur Media Group.

The documentary screening is appropriate for viewers of all ages and is free and open to the public.